Why did Ultra Speed CD-RW and DVDÂ±RW never become popular?

Just used a handful of Verbatim 24x (Ultra Speed) CD-RW the other day. Now I’m really wondering why these have died out nowadays in favour of the slower 10x (or 12x) CD-RW (also 8x DVD+RW is a rare sight, 12x DVD-RAM never left Asia at all, DVD+RW DL development was quietly cancelled). There seems to be a curse on the RW media types.

I personally notice quite a speed difference when I compare 10x with 24x or even 32x recording and I like Ultra Speed media a lot.

Was it the higher cost, the fact that these discs arrived too late to compete with the cheap and fast -R media, or the fact that the installed base of supporting drives initially was too small?

Maybe the write-once media got so inexpensive, that there’s little reason to use RW media at all?

[QUOTE=DrageMester;2628481]Maybe the write-once media got so inexpensive, that there’s little reason to use RW media at all?[/QUOTE]

Good point. Not so devastating when you fluff up a disc, as it was way back when the CD-Rs cost an arm an a leg!

Personally, I’m still quite fond of my 24x and 32x CD-RW media as well, more so than the 10x-12x stuff. All my drives seem to handle them just fine (usually burn at the disc’s rated speed, unless it’s audio at 16x).

EDIT: But I’ll tell you one place where CD-RW media still comes in handy for me - we have a CD player in the car that doesn’t take USB sticks or whatever. Purr-fect!

Good to know â€“ this kind of explains why RW usage has been declining (although I still think it’s sad fast media died before slow media).

I personally still burn RW from time to time, usually stuff like bootable Linux CDs that are quite handy at times when a computer is acting up. Also good for sneakernets and passing data to others (losing a RW is not as much a loss as losing a USB flash drive is).

They just became obsolete by new formats (and higher capacities) appearing on the fast growing market.

“RW” media is SLOW and additionally it was more expensive than "R"
media.

another nail in the coffin of RW media was newer media types with ever greater capacity.

THEN inexpensive flash media killed both.

And it happened again with dirt cheap hard drives.

Hey, before the Thailand floods last summer I could buy hard drives for less $/GB than I could buy DVD+r discs.

So it wasn’t only capacity and cost but speed… RW media lost on all three factors.

I still keep 24x CD-RW media around for the old sneakernet (I have a few DVD+RW also, though they’re not high speed they do offer high capacity). I bought a pack of the CD-RWs and have used them over and over for years. Though I admit that USB drives are cheap enough that they’ve just about replaced disks for my sneakernet.

[QUOTE=lucky9;2633605]I still keep 24x CD-RW media around for the old sneakernet (I have a few DVD+RW also, though they’re not high speed they do offer high capacity). I bought a pack of the CD-RWs and have used them over and over for years. Though I admit that USB drives are cheap enough that they’ve just about replaced disks for my sneakernet.[/QUOTE]
Here are some Verbatim 24x cd-rw:http://www.ebay.com/itm/180973546816?ssPageName=STRK:MESELX:IT&_trksid=p3984.m1555.l2649

8x DVD+RW:
http://www.meritline.com/dvd-rw-8x-4point7gb-media---c-7551.aspx[/QUOTE]
I do have five Verbatim 8x dvd+rw disc (but one of them will not burn properly without reading/writing errors).
I also have two Imation 8x DVD+RW, ten Verbatim 6x dvd-rw, one Verbatim 4x & 2x dvd-rw, and five Verbatim 5x DVD-RAM.
For rewritable DVDs, I like Verbatim 6x dvd-rw the best.
Both Verbatim 6x dvd-rw & 8x dvd+rw can have 96-98% quality score.
The 2x and 4x speed dvd rw media by Verbatim is not as good quality as their 6x DVD -RW & 8x DVD+RW.
6x dvd-rw and 8x dvd+rw are only good for burning in the computer, not for dvd recorders.
I noticed that Maxell and Panasonic both discontinued 5x dvd-ram so Verbatim is the only one that caries 5x dvd-ram in USA.
I do have six verbatim 32x cd-rw & 87 verbatim 24x cd-rw discs and they they are nice and fast, so I do not care for 4x and and 12x cd-rw.
32x cd-rw will may only burn up to 16x or no to burn at all in laptop computers.

AudioCubes is Internet's premier website for Japan's audiophile hifi equipment since 2001. Ships directly from Osaka Japan to the US and the world. 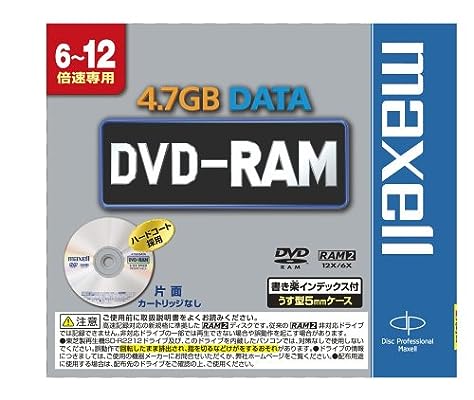 [QUOTE=chef;2661861]No 12x DVD-RAM media? :D[/QUOTE]
It looks like maxell discontinued (DRM47D.1P) 12x DVD-RAM. But the problem is, is that dvd-ram is not compatible with most dvd players and some dvd writers, so they are the worst DVDs for compatibility. 8x DVD+RW discs are not hard to find, I recommend using Verbatim 8x DVD+RW or 6x DVD-RW for high speed rewritable DVDs.

On my drives the Ricoh 8x DVD+RW performed better than Verbatim with regards to longevity. But I guess these discs are very hard to find now.

DVD-RAM 12x is for Asia (.jp exactly) only, that is the info behind it.

Nothing about the production really.

Maxell’s current products for DVD-RAM in Japan. 12x DVD-RAM is not listed. :http://translate.google.com/translate?hl=en&sl=auto&tl=en&u=http%3A%2F%2Fwww.maxell.co.jp%2Fjpn%2Fconsumer%2Frec_disc_dvd_ram%2Findex.html

Got a couple tucked away. I daren’t use them though, how sad is that?

But these days we count in higher capacities.

It’s not the size of the media, it’s what you do with it…