What was your First Computer circa 1989

This was actually my second, my first was a Commodore 64

My first was a Apple IIc. And I still have it. Don’t know if it still works.

Mine was 8,000grand and the monitor wasn’t even included.

My first one was also a Commodore C64. While I disposed several of my old computers in the meantime, I still have my original C64 - unfortunately it stopped working. One of the memory chips had errors and after I tried replacing it, the C64 no longer boots at all.

My first was an Atari ST, and it is still used today in my home studio.

[QUOTE=Dee;2723751]My first was an Atari ST, and it is still used today in my home studio.[/QUOTE]
Wow Wendy, I had forgotten about the Atari Series, after that they went into gaming real big and boy, what you have is real collectors item.
@Liggy-my Commodore 64 is still in its original box, in my attic, works greats LOL.

The first home pc I used regularly was a Kaypro II. Circa 1983 or so.

But I didn’t own it. Belonged to my roommate, and there wasn’t much it could do besides word processing. Connected to a dot-matrix printer, it was still better than a typewriter.

I bet that one cost a bundle back then Kerry. It looks like it came with the monitor.

Then in 1988 I bought a REIN ELEKTRONIK 420 SLC Laptop. I simply loved it.
The picture of my beloved REIN Laptop is in this thread: http://club.myce.com/f1/you-old-fart-334333/index3.html

I used the REIN till 1993, when I bought a Toshiba Satellite in New York.

Btw, what was the first Word Processor that you, guys have used.

In 1988 I satrted with ChiWriter, then I used Word Perfect v.5.1 (DOS) as it was the official word professor of the UN.

Same here…my 1st was a Fujitsu Siemens with an Athlon 800,20 GB HD,64 GB RAM and an ATI Rage Pro.
After saving some money,the GPU was replaced with an ATI All-In-Wonder 32 MB to play around with video and to digitise some Disney video’s (yes,I had a hardware Macrovision descrambler,home made by a tech guy

Great stuff guys and gals, this is really intriguing , love to hear more, post some pics if you have them.

BBC Micro (model B) circa 1982, with an Epson RX80 printer and later a Viglen 5.25" floppy drive to replace the cassette player. The screen was a PYE portable colour television, modified by adding a DIN socket for the computer.

In the 1980s this country was in a fantastic position thanks to the micro computer boom and the BBC’s home computing initiative. But all that was squandered and look where we are today.

Wordwise was tricky - one wrong move and you lost [I]everything[/I]. That happened to my history homework just after I started high school 10 years later. It was Sunday night and the work was due in the following morning, so I had to re-type the whole lot from memory in half an hour (I got the only A in the class).

I could finally start saving documents and used the computer for as much of my homework as possible, and for the next 2 years was the only person in the school using a computer. I hated Wordperfect 5.1, briefly used Word for Windows 1.0 & Windows Write, but Ami Pro 3 was a revelation

- the first true WYSIWYG word processor for PCs. To this day I still use its successor Lotus Word Pro.

My first was a Commodore 64. Then an IBM PC that broke my pocketbook.

I remember the first internet website I ever logged into was Columbia House to get the 10 free cassettes. LOL.

My first experience with Internet was when I made my first e-mail address. The first one was yahoo mail, second a usa.net e-mail address etc. The second stage of my weblife was when I discovered different chatrooms. Used to be a regular in one of yahoo’s chatrooms.

The first computer my family owned was a Sinclair ZX Spectrum: 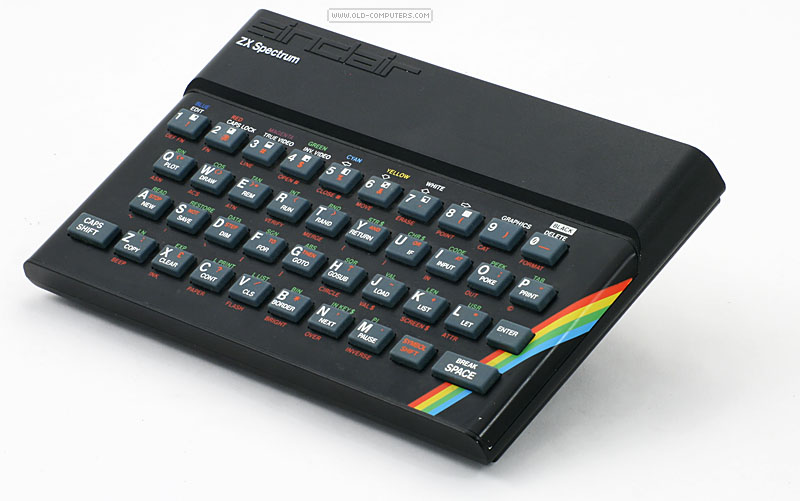 After playing around with it for a few years i knew almost everything this machine could do. Amazing machine for its time.

Later on i worked with a Philips P2000, a BBC One, Amstrad, etc. at schools. Played with Commodore 64, MSX, Amiga and other stuff as well.

Our first pc was a 286 with 256 color VGA and a 40Megabyte harddrive which you had to park before shutting down. I was a regular visitor of the demo scene so i witnessed all the transitions from calculated software techniques to hardware accelleration first hand. Some programmers were using amazing methods to get things done.

Nowadays, 30 years later, i still love tinkering with old systems. They were so much more carefully programmed, because of all the huge limitations. Programmers were extremely creative back then.

My wife likes the fact i can get pretty good performances out of very old machines, but hates it that i’m very reluctant to throw away old electronics

Extremely informative and for that time, this was really advanced.;)

Geez… by then I was on my third or fourth computer.

you are talking 25 years ago…

I loved my Atari ST, but I had a Sinclair Spectrum and a Sinclair ZX-81 that I loved to bits before that too.