After seeing these testresults with my own eyes, I nearly started banging my head against the wall…

First off is Verbatim datalifeplus made in MEXICO.

Disc 1: (have identical serial numbering system as those which states made in china).

Disc 2: Bought in another store, serial number is a bit smaller but else it’s identical to the other made in Mexico disc.

Second off is Verbatim datalifeplus made in INDIA. Out from the serial numbering systems it seems like those may actually be prodused by Moser Baer in India.

Disc 1: From a 50 spindle with “white printable top” type discs.

Third off is Verbatim datalife (not plus) made in CHINA. Serial numbering system is identical to the first made in Mexico disc. 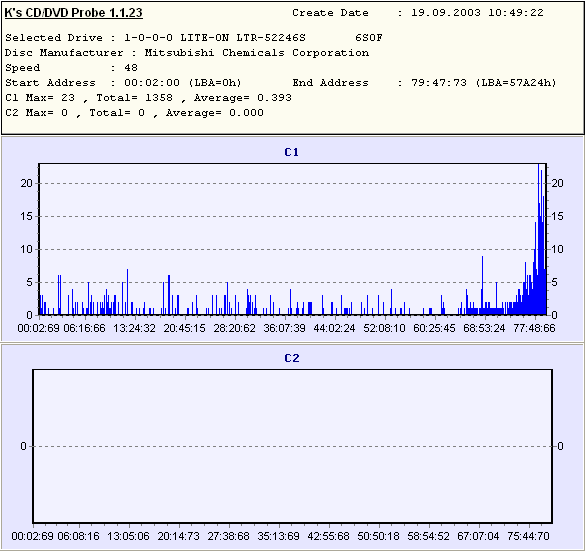 Ouch, C2 errors. The China stuff looks very mixed, is it possible that these are fake Mitsubishi? Or the packaging is wrong?
Or Mitsubishi have started production in China and is having big problems. Cause those scans are worse than CMC!

Typical Azo, there’s a very fine line between OK burn speed and too fast burn speed. Do they complete the burn at full speed, all the way through the lead-out?

The speed reduction could make the scans look differntly.

Maybe the speed dropped slightly at the end. About all discs took about 2 min and 35 seconds to write at 52X.

Airhead: You’ll notice that it’s actually the India discs that came out worst. (90% of all datalifeplus discs sold in Norway is made in India).

About all discs took about 2 min and 35 seconds to write at 52X.

So, is it good or bad if/when the race ends up in another coaster ?