The hunt for the racist killers of a black teenager who was left with an axe embedded in his skull in an unprovoked attack is continuing.
A-Level student Anthony Walker, 18, died in hospital after a gang of up to four white men attacked him in Huyton, Merseyside, on Friday. 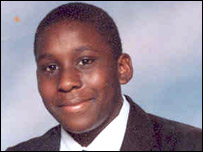 Anthony Walker, who loved basketball, wanted to be a lawyer

He had been taunted at a bus stop with his white girlfriend and a male cousin. They fled but were set upon in a park.

Police believe the killers are local, and want the community to give them up.

Mr Walker had spent the evening with his girlfriend, who attended the same sixth-form college in Huyton.

Merseyside Police said that as the couple waited for a bus outside the Huyton Park pub with Mr Walker’s cousin they were subjected to a “torrent of racial abuse” by a man in his 20s wearing a hooded top.

Police want to trace two men who were seen talking to the man shortly after he hurled the abuse.

Mr Walker and his companions did not retaliate to the abuse and left to find another bus stop. But they were followed and as they walked through McGoldrick Park they were attacked by a gang of three or four men.

Mr Walker’s girlfriend and cousin saw a man carrying an axe bludgeon him, and ran to get help. When they returned minutes later they found him slumped on the ground with massive head injuries.

The axe was embedded in his skull.

Police hope CCTV footage from a camera just yards away from where Mr Walker was attacked will provide vital clues.

Mr Walker was taken to Whiston Hospital and later transferred to Walton neurological centre where he died at 0525 BST on Saturday.

Merseyside Police Assistant Chief Constable Bernard Lawson said: "What we are dealing with here is an unprovoked and vicious attack on a young black man which we believe to be racially motivated. 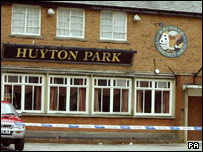 The area around the pub has been sealed off

“This was a despicable act and we are absolutely determined to find the people responsible.”

“We believe the offenders are local and we believe it is the responsibility of the local community to give these people up,” he said.

“There are a lot of decent people in the local area who are absolutely shocked at what has happened.”

Police said there have been a series of racially motivated attacks in the area, and were not ruling out a connection.

Several floral tributes have been left at the scene of the murder.

Mr Walker was a churchgoer who was also a keen basketball player. The BBC’s Richard Wells said local people had told him that those who knew him said he “wouldn’t hurt a fly”.

Mr Lawson added: "Anthony was a young Christian studying for his A-levels and wanting to be a lawyer.

“Those dreams for him and his family are now dashed.”

We really live in a sick world.

That is horrible, I hope they find the people who are responsible for this heinous crime.

Just goes to show that hatred has no limits and when people say humans are naturally good…well, where’s the goodness in this? There is none–it’s just merciless and hateful.

Why humans act like so horrible … even animals arent so brutal.

why are they making this a racist act…People are mean…and the color of the skin shouldn’t matter…this was totally uncalled for …after all he was HUMAN …and his life was taken from him much too early…by a group of men .he didn’t even have a chance…now this is what I called premeditated…they carry around axe’s for what purpose…I’m sure they were not loggers…sad sad state of affairs…