TOKYO (Reuters) - Japanese electronics and entertainment conglomerate Sony Corp (6758.T) will likely suffer an operating loss of about $1.1 billion due to sluggish sales and a stronger yen, a source with knowledge of the matter said. 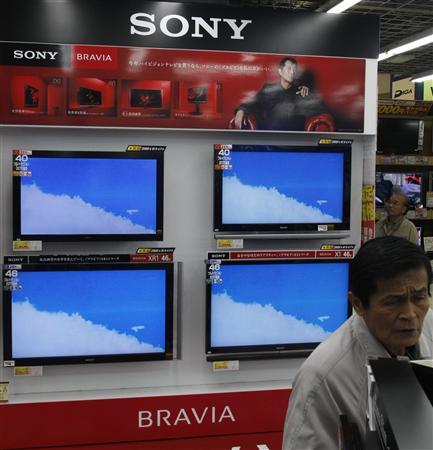 Japan's Sony Corp will likely suffer an annual operating loss of about $1.1...

Did I say good what I should have said was outstanding now they might rethink how they treat people.

[QUOTE=samlar;2196269]Did I say good what I should have said was outstanding now they might rethink how they treat people.[/QUOTE]
Oh? How so?

At any rate, while you celebrate Sony’s potential downfall, it would result in many consumers instantly losing their warranties, and much less competition on the market, meaning lower competition & hence increased prices for electronics goods … and quite frankly, the electronics market being flooded with feature-rich, quality poor, Korean garbage - manufactured in China

sony tries to control everything so they make the max profit. That includes leading the law suits over music download, placing software on your computer without you knowing it, and trying to make it harder and harder for you to back up movies. I for try to never buy sony

I, too, am feeling like the this might be a bit of a wake up call for Sony, and I used to be one of the willing to pay a premium for their products; nearly everything I have is a Sony - my 2001 VAIO is still my main machine! I don’t know quite what has happened over the last decade, though, because it seems like Sony has taken a little less pride in their work on some items. For example, the WEGA trinitrons that cost an arm and leg and then unexplicably refuse to turn on after as little as 4 years. There’s a petition posted online that currently tops 18pages worth of comments from the disgruntled regarding this specific issue and my name is on it! I currently own two 250lb paperweights which I am hoping to Frankenstien into one usable TV, but Sony will only service one and even that will likely cost 250-400 dollars. I had a DRU that died on my in less than 6 months, my Dad’s digital video camera had to be sent back for some issue that plagued a number of products manufactured in the 2000-2003 years, and my boyfriend and his buddies have gone through at least 5 PS2’s. :a
The picture on their tvs is still divine, and no one has come close in that area in the laptops, but I’m kinda thinking the only reason I can see what I’m typing now is that I bought the Samsung LCD instead of the Sony with my desktop all those years ago…

My experience with Support for anything but my VAIO has been unproductive and I feel that the Trinitron issue is just unacceptable. Loyal Sony customers were loyal because they trusted that they were getting their money’s worth even if it cost more of it. Nowadays its looking like the company has adopted the ever-popular but ultimately self-defeating business model prioritizing Profit over Product and the consquence is more dire because of the ecomic atmosphere. I bought an Optiarc DRW only because of the NEC chipset, and If I cannot save one TV of the pair and have to buy a new one, chances are very slim that it will be a Sony.

Trust is easier earned than regained.

Good over priced for years.