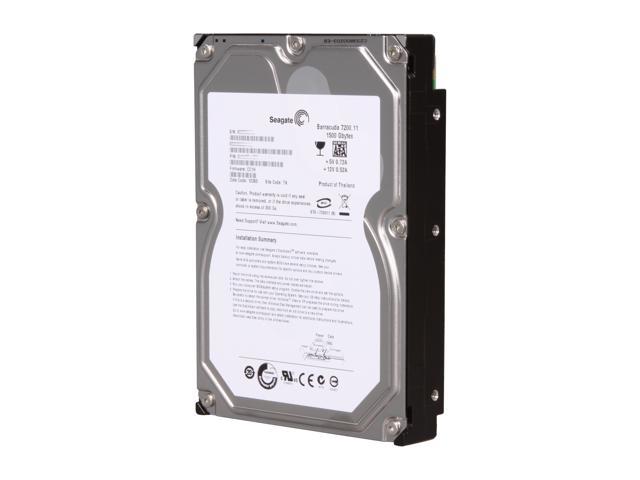 
just passing along the sale info.

Personally I love the 7200.11 product line from Seagate and I own a drive in this line. The drive performs REALLY well.

However … please remember that there was a royal cluster f**k with these drives about 1 - 2 years ago. The firmware that shipped with the drives would brick the drive (seemingly at random) on drive power-up 1 time in 10000. The determining factor was where was the last sector written in the drive cacahe (or something really crazy like that). 99.999% of the time everything is fine. But when you sell jillions of drives like Seagate does even a .001% failure rate from a cause like that (bad firmware) causes a HUGE number of irate customers … and rightly so. The Es.2 poduct line was also affected.

With this drive you should do 1 of the 2 things below.

[1] With your favorite disk tool (HDDScan, SpeedFan, etc.) determine the firmware revision level of the drive. If it is SD1A or later all is well. I could be wrong and a slightly earlier revision might be OK. Firmware SD17 is the one you for sure need to update. I believe that the current firmware that is available is SD1B. If you need new firmware see [2] below.

In order for the ISO to be able to do its job the 7200.11 dive must be visible to the BIOS (connected to the mobo). The drive cannot be on a different controller (e.g. some RAID card, JBOD card, “extra” SATA card, whatever).

Thanks for the valuable info.

Seems like a good deal but…the way my luck goes with
Seagate hdd’s I’ll have to pass I need a drive that will last me a little
more than a few days or a few minutes at a time.

[QUOTE=getit29;2572492]Seems like a good deal but…the way my luck goes with
Seagate hdd’s I’ll have to pass I need a drive that will last me a little
more than a few days or a few minutes at a time.

I totally agree and have moved from 100% Seagates to Western Digital Black Caviar’s and SSD’s-eh!!

I have a 7200.11 which I got on Black Friday at Newegg. Out of the box, it refused to spin up. The heads were seized, and I had to shake it to get it to finally work. It works OK now, although I find it makes odd clicking noises compared to WD drives.

They have $10.00 off other HD including some WD

You’d think by now oem resellers (or mfg) would make sure the correct firmware was onboard. I got a 1tb wd black – that should be good for 5yr or so… by then 4tb drives will be dirt cheap… nobody likes to tear down & rma a boot drive

I always get larger drives then transfer all my old drive with clone software to the new one if just upgrading for more room, or leave the smaller drive alone and move it down a spot if I’m also upgrading the OS. Then if I still have a much smaller old drive online I just clone it to the next biggest drive I have and retire it once I know everything works OK.
I have 3 Seagate/Maxtor 7200.10 drives and so far none of them have had any issues that weren’t my fault. The newest ones might be .11 drives, haven’t pulled them lately or found a program that says since upgrading to win7 64.
Oldest one is probably close to 3 years old now.

Not so fast. 3TB drives are only just now making their way to the market, and they are still high-priced. You won’t see 4TB until next year.

Also, many older computers and operating systems can’t use drives over 2TB.

Lastly, most of the cheaper 2TB drives are so-called “green drives” which run at a slower 5400 or 5900 RPM, and not at the faster 7200 RPM. If you want the faster spinning drives or longer warranties, you have to pay more.

The other day newegg had the Hitachi 3TB drive for $179.99 with the $20.00
off code but its over now and back to $199.99 for one of them. I think it was
the other day newegg had a 2TB Hitachi on the the shell shocker deal for the
price of $59.99 I think it was. So the price of hdd’s are coming down quite a
bit here lately now if only the SSD’s would drop in price as fast.

I purchased on of these Seagates about 2 months ago from Tigerdirect. It cost a little more, but hey, that was 2 months ago. The software for cloning the hard drives worked flawlessly. This was for my ancient Asus K8VSE Deluxe, AMD 3700 64 machine (which runs Windows 7 64 better than it ran XP!). I went from an IDE to SATA and the machine sprang to life. I know the old Maxtor drive was dying.

[QUOTE=negritude;2575580]Not so fast. 3TB drives are only just now making their way to the market, and they are still high-priced. You won’t see 4TB until next year.

Also, many older computers and operating systems can’t use drives over 2TB.

Lastly, most of the cheaper 2TB drives are so-called “green drives” which run at a slower 5400 or 5900 RPM, and not at the faster 7200 RPM. If you want the faster spinning drives or longer warranties, you have to pay more.[/QUOTE]

Actually, 3tb drives (in EXTERNAL configs) were available as far back as middle of last year… only Internal drives began shipping late September 2010! What we’re seeing is an inevitable price reduction going on. I think the EXTERNAL first to market drives were about $300-$350 if i’m not mistaken. Probably didn’t see much interest. So, they remedied that by September with the internal drives reaching under $250… With price erosion of 1-2tb drives down into $50-$99, 3tb drives looked quite pricey.

So, therefore, I do preduct that 4tb drives will hit the market sometime in 2011, not 2012, unless the economy (especially falls off a cliff or something drastic like that). $5 a gallon of gasoline can do that in short order…

In some sadistic way, I hope the oil companies & gasoline refineries & gas stations gouge the consumer, as there are new bio-ethanol & bio-gasoline micro fueling machinery which will become available to home consumers to make replacement fuels for as low as $1 per gallon (the ethanol anyway with a return to profit in just 10-13k gallons!). Then they’ll screw themselves right out of a customer base permanently.

I bought one of the Newegg 7200.11 ST31500341AS 1.5 TB drives and I’ve started testing it. Out of the box things look normal. So far I’ve written every sector on the drive and there are no reallocated sectors or odd noises/behaviors from the drive.

The firmware version on my drive is CC1H. As I type this the “firmware upgrade” web page for the 7200.11 drives says not to modify the firmware on 7200.11 drives with CC series firmware. Did anyone else who got the $60/$70 deal NOT get a CC1H firmware drive?

Oddly, the only utility that I have tried so far that can read the SMART data from the ST31500341AS with CC1H firmware is SpeedFan.

One other very interesting thing has shown up. My preliminary testing with HD Tune seems to indicate that the drive has 64 MB of cache. With a quick search I do not find others on the web reporting such a find, but I have seen in the past where drives have been found to have different amounts of cache than the spec sheet for the drive would indicate. I’m not sure what to say about the cache without further testing.

Can anyone suggest an alternate method for testing the amount of cache on the drive?

I wouldn’t use a Seagate drive even if they gave them away for free. Just this week I had another one I purchased less than a year ago completely die on me. Luckily I didn’t keep anything all that important on it because it had been making noises for months. IMO, get a Samsung, WD, Hitachi or a monkey with a chisel and stone tablet. Anything but Seagate.

I wouldn’t use a Seagate drive even if they gave them away for free.
get a Samsung, WD, Hitachi. Anything but Seagate.

I hear ya I’ve been trying to tell that to the people for quite a while now
but it seems some of them is never listening.

[QUOTE=getit29;2578293]I hear ya I’ve been trying to tell that to the people for quite a while now but it seems some of them is never listening.

I think the drive that just died was the last Seagate drive I had in use. I believe EVERYONE I purchased for the past 2-3 years is now dead. Also, one in my son’s computer died about two months ago! I didn’t even bother getting replacement drives because I would not trust the replacement (i.e. refurbished) one they would send me. I buy only Samsung drives now. I have never had one of their drives die on me and I have one that is about seven years old.