Robots to serve drinks and converse with drunks!

Isnt this the snazziest thing ever?

At one of the venues for the APEC forum currently underway in Busan, a bartending robot is poised to make its public debut, taking orders and serving the gathered leaders – just like a human. It is only one of various walking humanoid helper robots that have been shown around Korea, but this is the first time that such a robot has been able to carry on conversations with customers and fetch the items they request.

not good.
i want a bartendress with warm blood and cleavage!

There’s a “No Sex Please, We’re Asian” link there.

At the bottom of the list was Japan, a nation with a word for â€œdeath from overwork,â€ with 45 times per year, short of even half the global average. Singaporeans ranked second with 73 times. Nine Asian countries were among the bottom 10: India with 75 times, Indonesia with 77, Hong Kong with 78, Malaysia with 83, Vietnam with 87, Taiwan with 83, and China with 96. Sexually liberated Sweden was the only non-Asian country with 92 times a year. Korea was not included in the survey covering 41 countries and 317,000 people.

WiBro phone also displayed at the APEC in Busan: 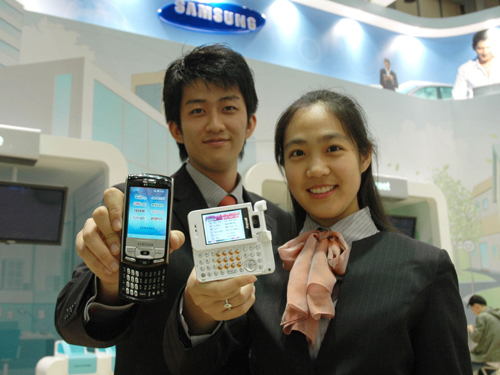