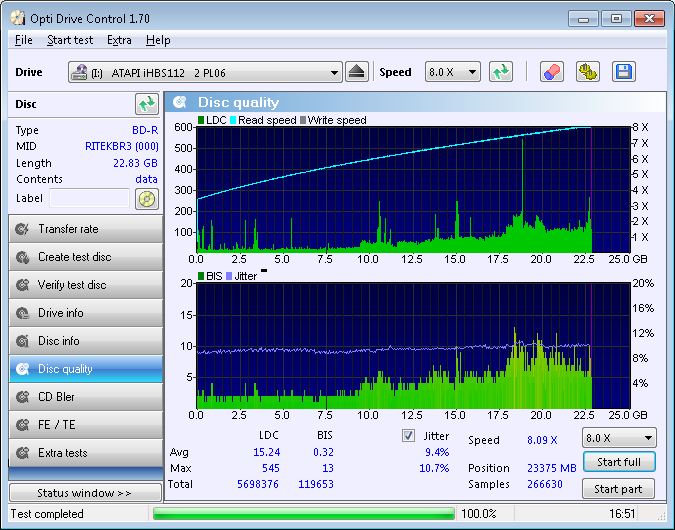 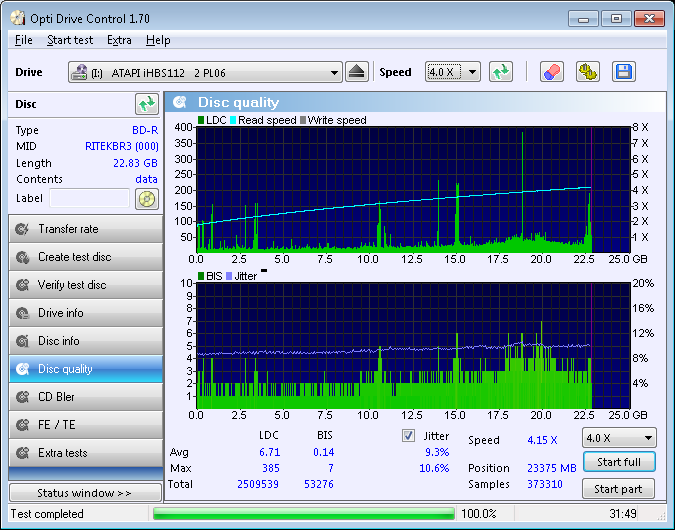 Maybe I’m lucky (or stupid), but having read all the stories of failing Ritek BD-R media I decided to give it a try, maybe they took the lesson and improved their products? It’s still quite early to say, because my oldest BR2 media is just 2,5 years old, but I don’t see any dramatic symptoms of degradation yet. I can’t really have the discs clean off dust, as I rub them with a clean cloth I always get some smudges left or small lint coming from somewhere, therefore I believe that increased error rate is somewhat justified. I scanned 3 oldest discs, 2 of them stored in cake box, 1 in jewel case, and all three give similar results. Here is one example, stored in cake box, disc produced in July 2015. 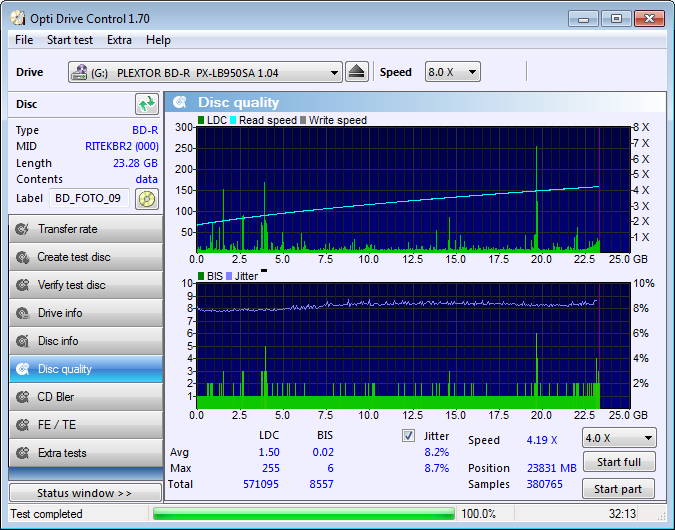 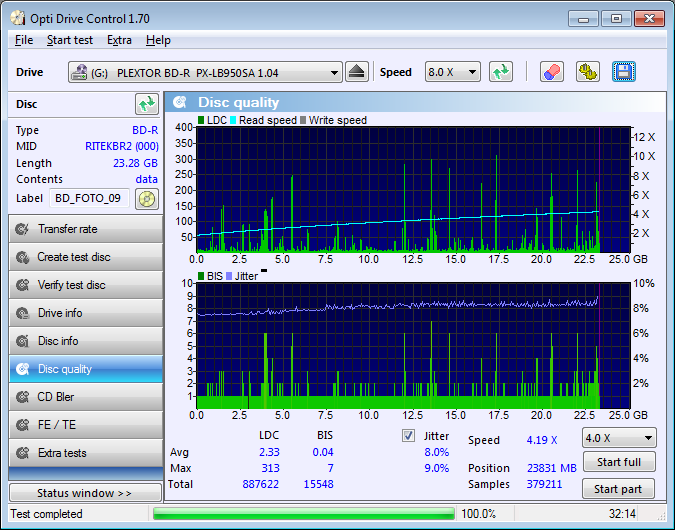 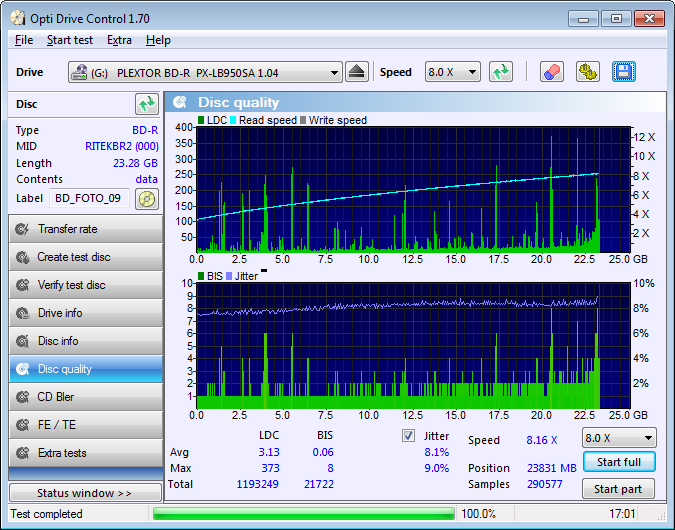 Have also some newer BR2 from 2017 Intenso branded and Sony BR3, but those I have burned in late 2018, so it’s too early to re-scan at the moment. 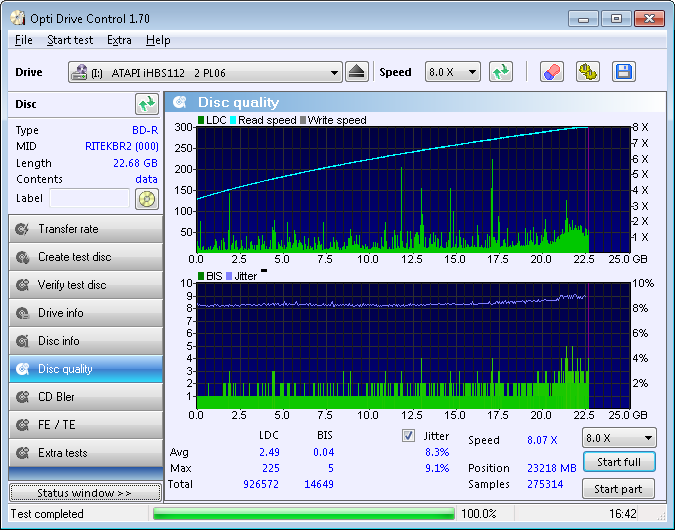 Again awful burn with the 212D 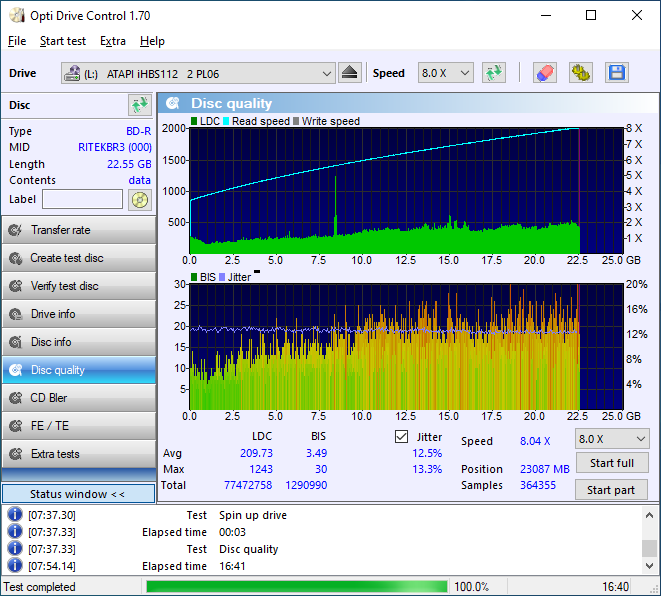 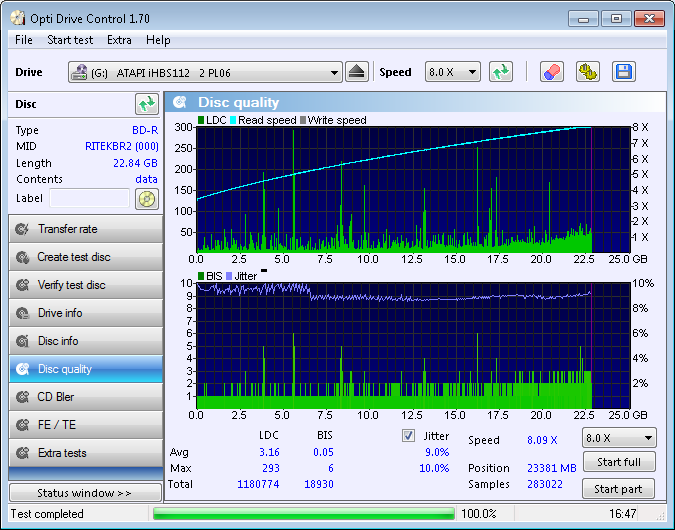 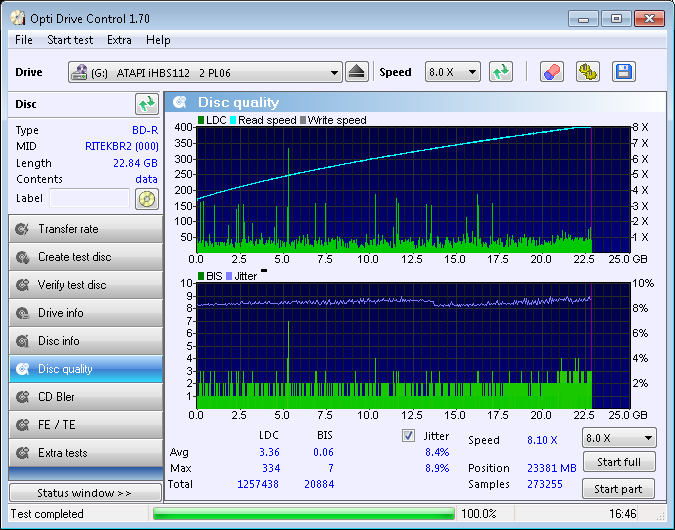 I gotta ask again here, has anyone seen RITEKBR4 media yet? It’s mentioned in every Pioneer media list for their current writers as one of the very few media IDs supporting 16x write speed, but I’ve never seen it anywhere. 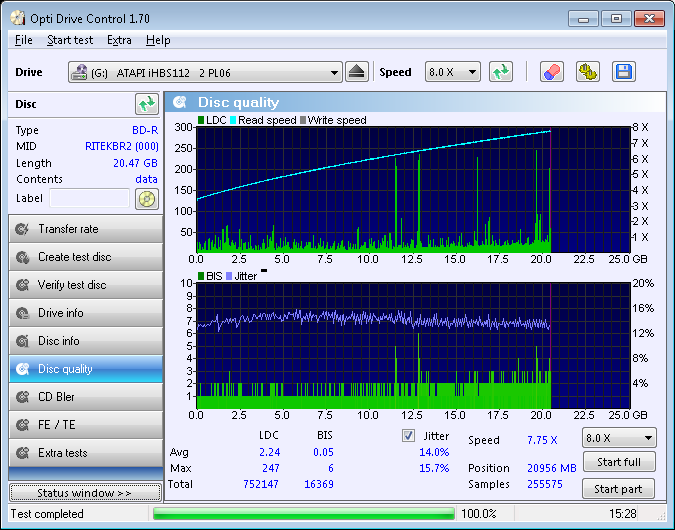 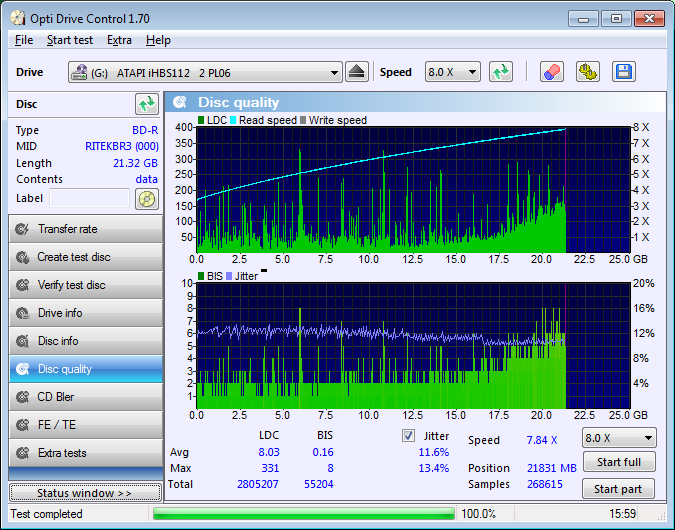 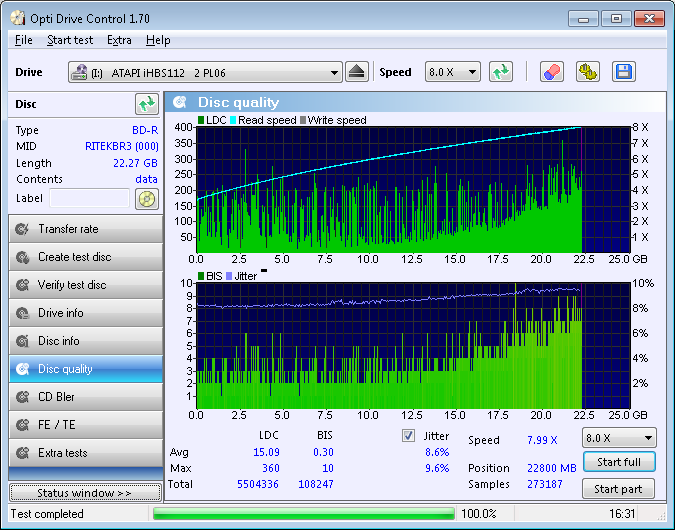 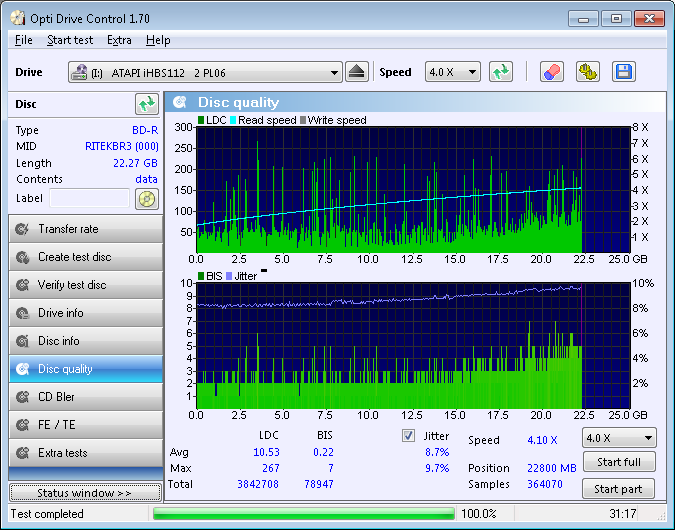 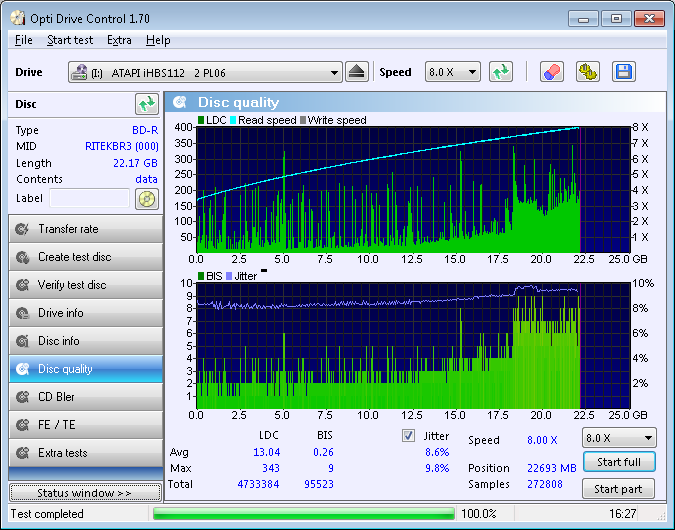 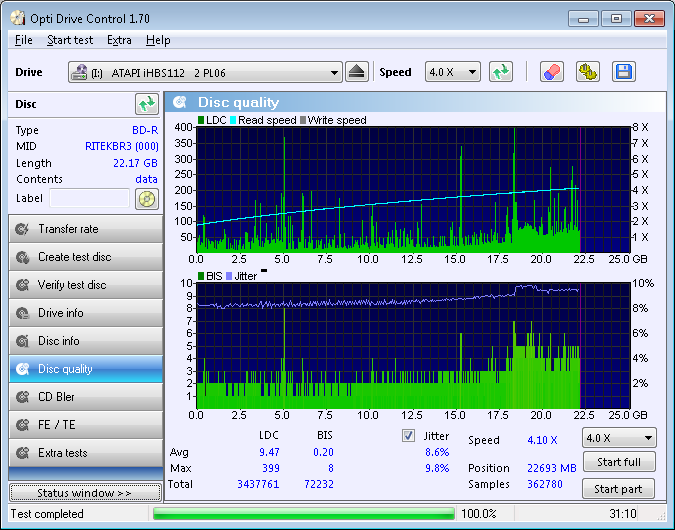 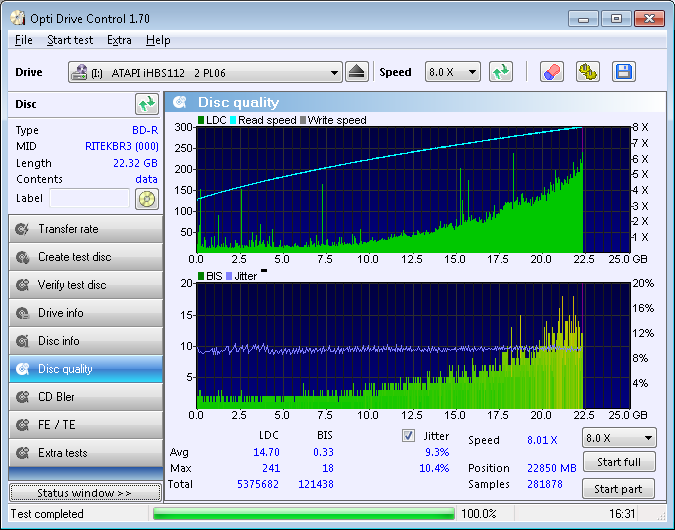 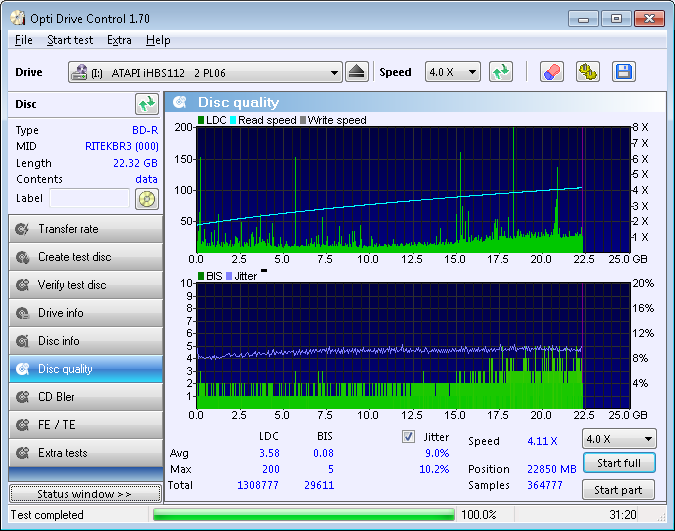 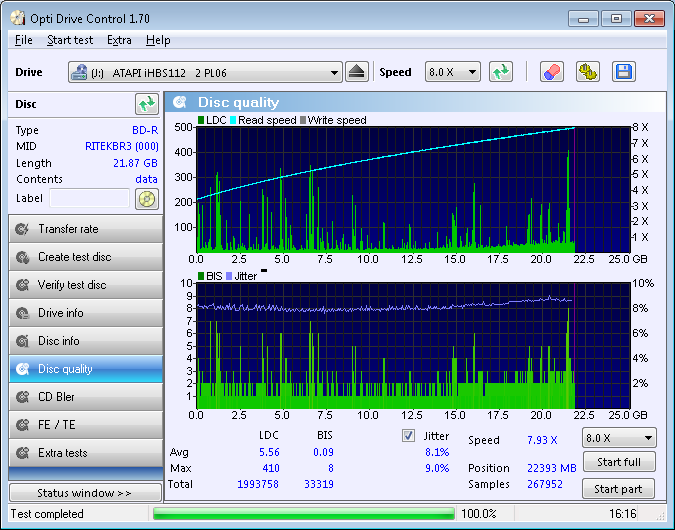 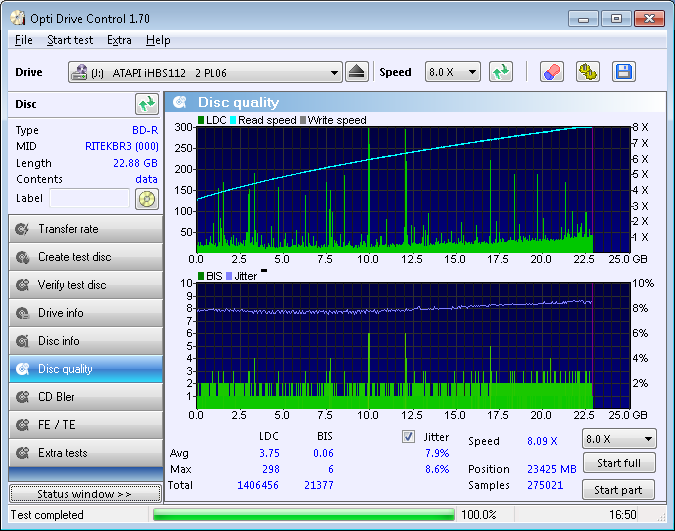 Very mixed results, but some are very nice

The LiteOns always a bit more problematic on higher scan speeds than a LG with Vinpower-FW, I know. But thought the Plexdisc with OTCBDR002 are the most sensitive . 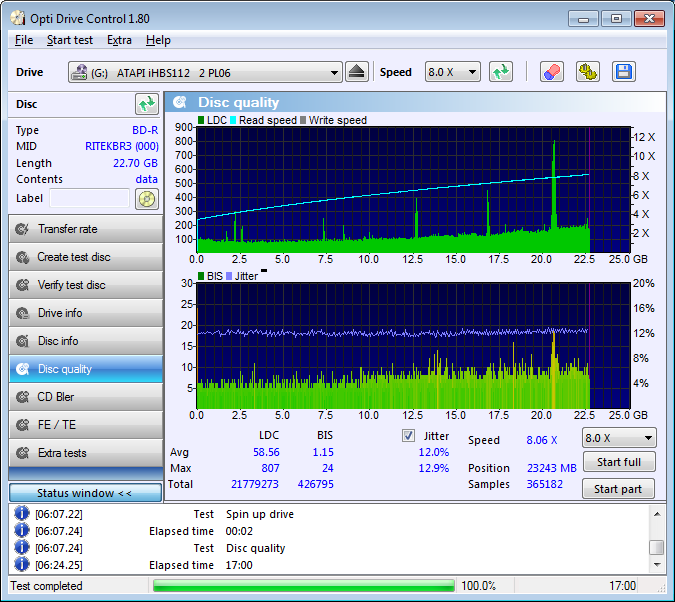 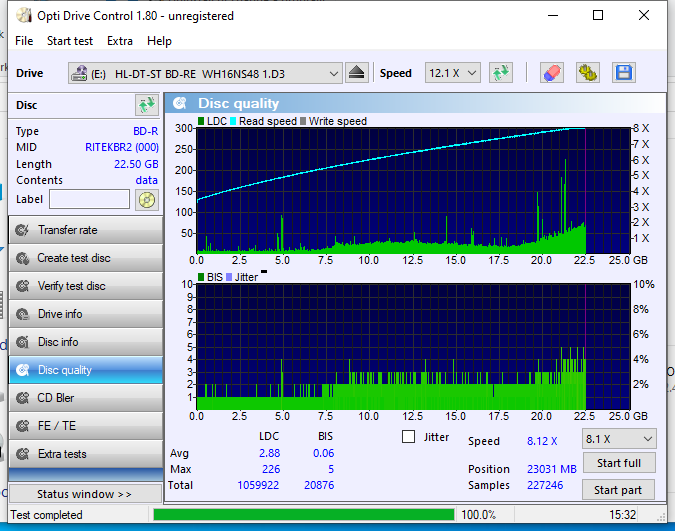 Am I crazy? This seems quite good to my eyes, especially considering it was burned at 6x. Except for the steadily increasing LDC and BIS, the raw numbers rival the VERBATIMe I’ve been burning on the same drive, I think.

This is very good, but I´d also had some cvery good BR2-scans in the past and after some years it was unreadable.

This is very good, but I´d also had some cvery good BR2-scans in the past and after some years it was unreadable.

Yes, this is my concern as well. I’m mostly using VERBATIMe discs for this reason, but I bought some of these Ridata as they’re much, much cheaper than the Verbatim discs. So far, I’ve only used the RITEKBR2 discs to store parity data for the contents of the VERBATIMe discs. I figured it’s good to have a mix in case the Ridata miraculously live longer than the Verbatim discs. In a post elsewhere, I mentioned that my Ritek BD-RE discs have held on far longer than the awful PHILIPR04 BD-R discs I used when I first started burning. The Ritek BD-RE are all still readable 5+ years later, and none of the PHILIPR04 discs are readable after the same amount of time. At the time, I definitely would’ve guessed that the cheap BD-R discs would hold data better than the equally cheap BD-RE discs, but I was wrong. This time, I’m expecting the Verbatim discs to hold data longer than the Ridata ones, but I’m prepared in case I’m wrong again!

Anyone Try these?, I know ritek pro dvd have MXL MID, but no idea for these, I cant get them in Australia