I just ordered a 100 pack and they should be here by Friday. I’ve used them before and been very happy with the results. Parity errors were among the best of any media i’ve used. I’m just glad media keeps dropping in price because this is a great deal especially for 8x media. Oh, almost forgot, there’s a code “TCB10” you gotta enter when you checkout so you get that additional 10% off.

Good luck with these. A lot of people have had problems with Prodisc of late, especially 8X. Hope yours are OK.

like bigmike said, this media is excellent. I’ve never had a problem other then probably two coasters I caused on my own. When I get them and burn 20% or so I’ll report back but like I said, i’ve burned plenty of these with great results. I even backed up my Hellraiser DVD’s on them so they’ve gotta be great.

Yes Prodisc 8x +R quality has taken a dive. They were consistant all thru the disc. Now Im seeing lots of problems near the end of the disc. I hoped it was just limited to one or two spindles. I got more from different sites and all have these problems. What a shame…

Of course, there is no guarantee that a spindle that you order will have the same thing.

Did you get them recently and have you done any scans? In 90% of dvd players I’ve tried they work fine. Every now in then one will have playback problems at the end of the disk.

that is unfortunate.
I suppose they wanted to balance out their cr@ppy DVD-R (ProdiscF01) media?

I bought a batch of Datawrite Greytops, FUJIFILM03, from UKDVDR and these work great on my NEC 3500 and Lite-On 1633S. However, a friend brought up what appeared to be the same disc (same colour/name/speed/type) and when burning to them, they failed in both the NEC and Lite-On!!

Checking the MID of these discs we found they were PRODISC F01 :Z so Datawrite definitely swap dyes and it’s pot luck whether you get a good batch

To be fair to them, their Datawrite 8x +R that use PRODISC R03 dye burn at 12x on my NEC and gave a good Kprobe scan with my Lite-On

I can’t remember when I started seeing the + spindles going down hill but it hasn’t been long.

ProdiscF01 and Fujifilm03 are both made by Prodisc, so it’s not surprising that Datawrite would have both codes for the same product. It’s probably out of their hands, just like with 8x Prodisc media being one of four possible media codes at online retailers like Rima, Super Media Store, etc.

My problem is I need a good printable DVD+R that doesn’t hurt my wallet.

Here is a good link for the Amazon Verbatim sale: 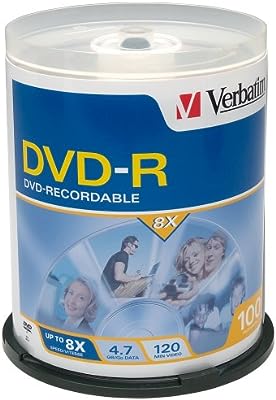 Did you get them recently and have you done any scans? In 90% of dvd players I’ve tried they work fine. Every now in then one will have playback problems at the end of the disk.

No problems with playback at the end of the disc. Works just fine.