I don’t get this. I burn them on a 3540 and the scans are not fantastic in the PIE area but the PIF count is low with maxes of 2 with 3 being the most. I come back to scanning the same discs just hours later and I see weird PIF spikes that can sometimes send the quality score in CD Speed to 0!

Yet a transfer test shows no read speed drops whatsoever.

I tried some other media that had been burned days ago and no issues that I can see like this.

BTW these are those Fuji Yuden T02’s from aprmedia that everyone says they have not so great results with too. Scan forthcoming.

EDIT: Oh yeah the other thing I changed was the PC PSU from a 400 watt to a Hiper 480 watt R-Type Red PSU. No idea if that would make any difference?

Now this is odd indeed. Now I don’t see any big red PIF spikes although the PIF total is higher than when I did a fresh scan right after the burn and has a higher max PIF. 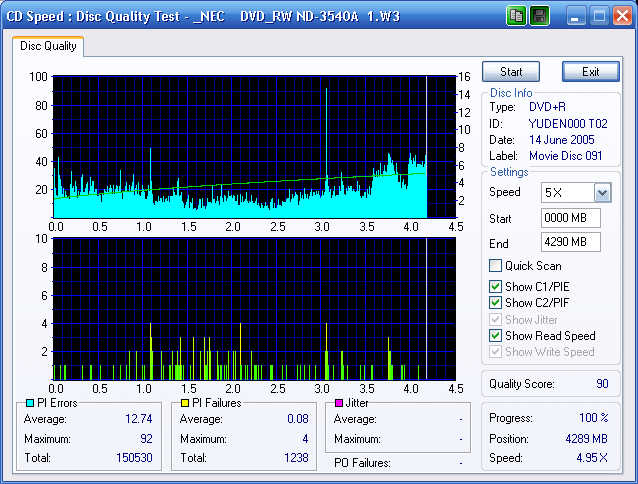 Going to scan another disc…

OK here is a disc I scanned 2 days ago just after burning. 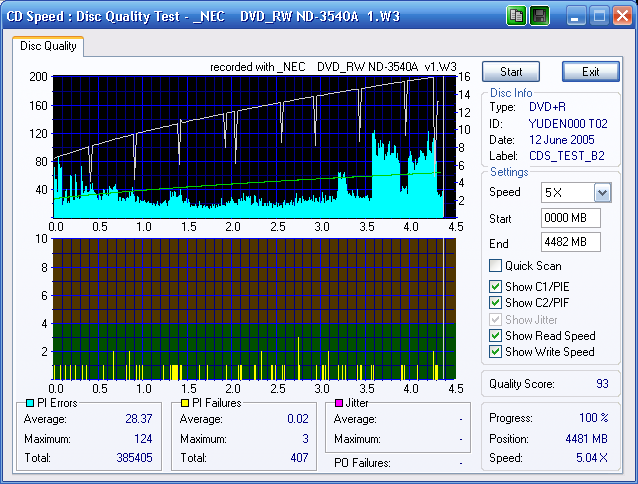 And here is the same disc 2 days later. I did not complete the scan though. 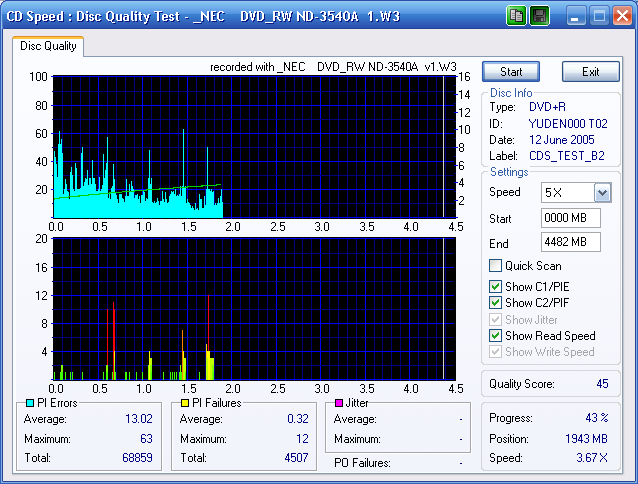 Just to compare I scanned in a slowed down Lite-On DVD-ROM drive since don’t have another scanning capable writer. It also shows odd red PIF spikes. Could this media be rotting as I type?

BTW these are those Fuji Yuden T02’s from aprmedia that everyone says they have not so great results with too. Scan forthcoming.

Everyone - really, almost all people from memory said they were great with scans to prove it. At least at cdfeaks.

I also noticed some big PIF spikes on some MCC03’s I burned on the 30th of May. Max of 22 that before I am pretty sure never went that highon fresh burned scan. However the PIF count/average was similar as the freshly burned PIF count/average and PIE is actually lower overall. I never know what to trust with those kinds of readings.

Here is another T02 burned 12 days ago. I am beginning to think that many if not all of the Fuji Yuden T02’s from aprmedia are either fakes or a bad batch. They initially give a low PIF freshly burned but a below average PIE score as witnessed by others. I suggest anyone else who bought this media from aprmedia also scan their disc that they burned more than a few days ago and see what results they get. Please post results in this thread. 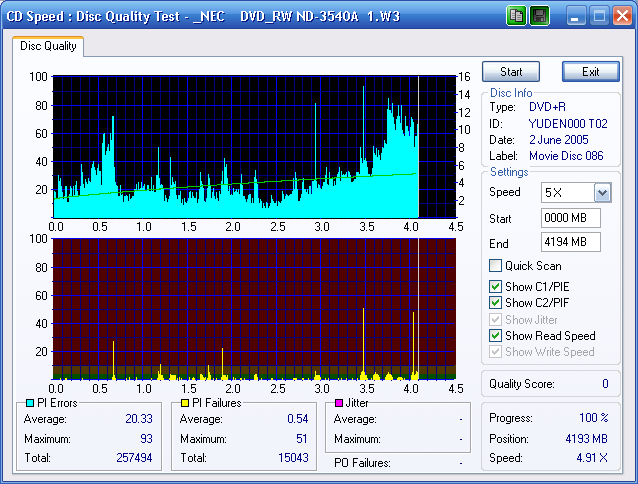 look the increase of PIFs after the middle of the disc! :a

I am not buying this media anymore. My next batch are probably going to be Verbatim MCC004’s just to see what they can do. I have seen good things from that media. I want to see more scans performed on media that’s been sitting in a folder or on a spindle for a few days/weeks. A before (Fresh scan) and then scanned after a few days or weeks would be interesting just to see how discs change over time.

Hm… don’t know about your discs… but mine Fuji YUDEN000T02 (58) burned with my Philips 1640P @ 12x didn’t deteriorate a bit in about 10 days.
First picture scanned after burning… second picture scanned today.

Without testing in a non-NEC burner I cannot say. All I know is that when burned in the 3540 I got terrible scans at 8x and 12x but reasonable scans at 16x initially. But coming back to scan them again (Sometimes only hours later) after the dye has cooled and hardened the scans are awful. Just about to scan a 12x burn (Only disc I wrote the speed on) that initially looked bad just out of interest. I can’t remember what discs were burned at 8x so I can’t test those with certainty (I will put the burn speed, date and firmware from any test burns from now on though).

EDIT: The 12x burn’s PIF is even worse and the PIE is worse at 12x than 16x too. No doubt I would see similar results for 8x. I can’t wait for the Benq 1640 to rear it’s head in the UK. I need another burner of quality to test these types of media problems out on.

I was just doing a BUNCH of scanning with Batch 1162 discs.

I have to go, but I’ll post results later…

But a preview for now… 8x burn, on 1.UG starts off with 1200 PI’s! That’s the PI SPIKE… not 14 or 16 or something. Needless to say, I stopped scanning fairly quickly and tossed the 8x disc in the trash.

I’m going to do 1 more experiment later when I come home… I still have a 4163B here. I’ll do 1 burn with it on the 1162 media, and compare it with all the NEC burns/scans I’ve been doing today.

Thanks. I look forward to it. It would confirm perhaps whether there really is a problem with the Fuji’s TY media (At least those being sold in the UK).

It really does seem to indicate that the UK is being served up crap TY media other than places like SVP I guess. I may ask SVP if they can send me a sample pack made up of my own choices of media rather than theirs (I’d like to try their supposedly legit TY, MCC004 and MCC03 RG20 for starters but do not wish to buy bulk just to test).

Pretty interesting feature here, it won’t let you…
Keep on the good work, I’m focused too on MCC004 from Belgium,
I’m following your program!

(BTW did you see the TAIYO Yuden Advert banner above the page?
Looks to me not authenthics.)

Must have missed that

Booktype was autoset at DVD-ROM when available.

All scanning done at 5x with Nero CD-DVD Speed 4.00 scanning interval of 8 EEC.

Discs are batch 1162 of DVD+R YUDEN000 T02 rated for 8x. They are silver laquer unbranded and were ordered from blankmedia.ca.

Conclusion: This media & batch has problems compared to other scans available on TY media. But the LG drive does better than the NEC drive with it.

I can’t comment yet on 2/3/etc etc day old scans second scans, but I have noted the varying results in FUJIFILM YUDEN000 T02

2nd scan you can see it just starting to go