SO I just got a new printer that will print directly onto printable CDs and DVDs. I bought a spindle of 100 Memorex printable DVD-R discs and I can’t get them to burn at all. I have tried using several different programs to burn from and every time it starts to burn it gives me an error that states that it can’t write because it is an incompatible media or something like that. I have no problems writing to Verbatim non-printable DVD-R discs but it is just not happy with the Memorex printable ones. It recognizes them as a DVD-R and that they are blank, but when it tries to write to them it says it is an incompatible format. Anyone have any ideas on what I can do? Below is the info about my drive.

Thanks for any help you can give me.

In addition to imkidd’s advice on cross-posting, Jesse, I’ve deleted your other post here in the Blank Media forum.

Can you download CD-DVD Speed, put one of those Memorex discs in your drive, go to the “Disc Info” tab, and post the MID info for us please?

That will tell us who manufactured the discs.

Thanks soooo much for your help, I will definitely keep in mind about the not cross listing. Sorry about that, I can see how it gets confusing as I got confused looking at them too and I am the one who posted them, it won’t happen again. Here is the MID info for the Memorex Discs.

Please let me know if you need anything else from me. I REALLY appreciate your help.

I think your choices are:

Solution is to get Verbatim printable since Verbatim works for you

CMC MAG AM3 is crappy media anyways. Highly variable and always seems to burn with high jitter. I’d consider AM3 to be giveaway media @ best for friends who want you to burn something.

Unfortunately you can’t even use them for that

You can either return them or get a drive like the Pioneer 115 and see how that goes (Pioneer would definitely burn to the disc and it should be readable at the very least).

[QUOTE=cd pirate;1941490]Solution is to get Verbatim printable since Verbatim works for you

CMC MAG AM3 is crappy media anyways. Highly variable and always seems to burn with high jitter. I’d consider AM3 to be giveaway media @ best for friends who want you to burn something.

Unfortunately you can’t even use them for that

You can either return them or get a drive like the Pioneer 115 and see how that goes (Pioneer would definitely burn to the disc and it should be readable at the very least).[/QUOTE]

Here’s a scan of a disc that I just was burning while reading this thread.
It’s not a full disc, but AM3s dont seem to have problems at the 4GB spot.

In my opinion, Memorex aren’t as bad as everyone think they are. 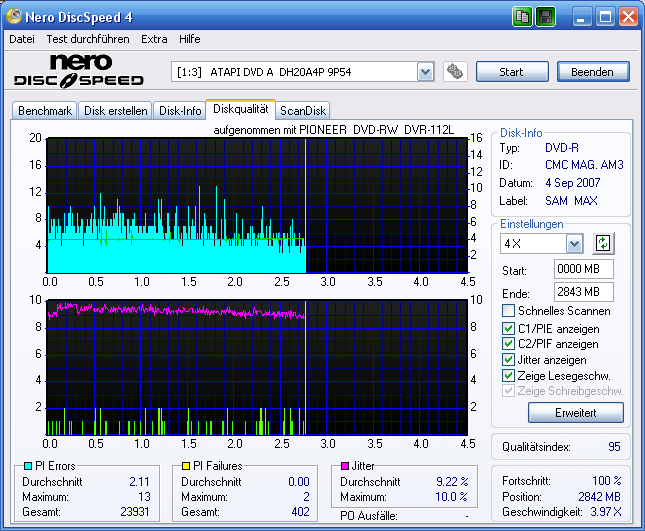 [QUOTE=cd pirate;1941490]Solution is to get Verbatim printable since Verbatim works for you

CMC MAG AM3 is crappy media anyways. Highly variable and always seems to burn with high jitter. I’d consider AM3 to be giveaway media @ best for friends who want you to burn something.[/QUOTE]

AM3 seems pretty solid to me. I’ve gotten pretty decent burns with it@16x on my Pioneer and Plextor drives.

[QUOTE=Two Degrees;1941605]AM3 seems pretty solid to me. I’ve gotten pretty decent burns with it@16x on my Pioneer and Plextor drives.[/QUOTE]

Same here, zero problems with it (TDK and Infiniti branded) burned at 8x on LG and Sammy drives.

TRT flawless, scans are similar to Womi’s above, no playback problems at all.

@Jesse - you don’t say what speed you’re trying to burn at, but try 8x.

Thanks again for all the help, I am using a laptop so getting a new drive isn’t something that I think I would be able to do at least not on my own…so that being the case, the consensus is that I should just give up on these discs and try to find another brand? Is there possibly different software I could use, I am trying to back-up my DVD collection as I have recently discovered several of my movies have been chewed up by the new dog, but the software I currently use (CloneDVD) doesn’t have a write speed setting that I can remember seeing. I have tried writing to these discs using other software as well including the built in windows writable folder thing, and the same thing always happens. Is there possibly some other program I should try? Thanks again everyone for your help. I REALLY REALLY appreciate it!

Given that it’s an 8x laptop burner, there’s a chance that the official firmware has no support for that 16x media code.

Your best bet if you have to use 16x media is to buy Verbatim, which has more chance of being supported, albeit at lower speeds, in the firmware.

Of course, an up-to-date external burner is another option.

External may be the best option as 8x drives are old technology and they probably don’t even have support for half of the 8x discs out there either.

Alright, I can resign myself to purchasing a new drive…although I would really rather have an internal drive (I have a Dell Inspiron 9300), I looked at Dell’s website and they don’t seem to offer any internal drives, does anyone happen to know of any that are compatible? If not how about a recommendation on a good external one? Should I go dual layer? Will the Dual layer drive write to the single layer DVDs? Thanks again for all the help…you ROCK!

You should be able to put any internal drive into your Dell - dependant on whether it supports IDE only, SATA + IDE, or SATA only, of course.

I fitted an LG H62N into my mum’s Dell Dimension E520, and I plan to put a Samsung SH-S203N into my own identical Dell. Both these PCs are SATA only.

Just find out what your Dell supports, and pick your brand

It should support IDE at the very least. If it had a hard drive, it will most likely be IDE. But as Arachne said, better check first.

My vote goes to getting a Pioneer.

Some laptop drives support the CMC MAG 16x codes, and do so okay–however, most of them don’t. If they do, it’s at 6x or lower, and most of the Taiyo Yuden, MCC/Verbatim, etc is allowed at 8x.

I feel my laptop’s internal slim Samsung with Taiyo Yuden, and it looks just as beautiful as destop drives [except for the jitter]. Feed it with MCC, still good. Feed it with CMC…that’s another story entirely. :Z But the old [2005-ish] external 16x drive I have for the laptop is fine with the CMC at 12x.

Word to the wise: don’t try burning at 8x on slim laptop drives unless your drive is known to work well with those discs at 8x. Otherwise, it’s essentially coaster city…

FWIW: Memorex CMC isn’t that hot in that it’s sometimes good, sometimes horrid. And I’ve only had a bit of CMC by others, but most of the others didn’t come out so well, either. HP branded stuff comes out fine, as did some TDK stuff, specifically.