OCZ stocks crashes to new low – will they survive?

I do hope OCZ survives.

On several occasions they have been the first to bring new technology to market and they have also helped push consumer prices down significantly in the past.

IMO they also have the best support forum and I wish the excellent OCZ support team all the very best in the coming weeks.

Best of luck, OCZ. It’s unfortunate that managerial mismanagement mired you in monetary misfortune. I’ve always had a good experience with their quality products.

That was one too many “m” words there, my friend.

I think I must have stepped through the looking glass coming into this thread. Best support and quality products aren’t the first things that come to mind when I think of OCZ.

[QUOTE=Stereodude;2707680]I think I must have stepped through the looking glass coming into this thread. Best support and quality products aren’t the first things that come to mind when I think of OCZ.

[/QUOTE]
Personally I believe they are great SSDs and as long as they are in business I will stick with them.

They have the best SSD forum so I’d say their support is great. I’ve had 2 SSDs from them and I’d buy another one if the price is right.
I hope they manage to stay afloat but I’m sure someone will buy them in they don’t.

Regds, JR[/QUOTE]
At this point we are all just guessing, but they have great R&D (in my opinion) and I still consider them the leader in many ways, without them the SSD wpuld never have exploded onto the market like they did. IMHO.

[QUOTE=alan1476;2707722]At this point we are all just guessing, but they have great R&D (in my opinion) and I still consider them the leader in many ways, without them the SSD wpuld never have exploded onto the market like they did. IMHO.;)[/QUOTE]

I totally agree with you Alan.

That was one too many “m” words there, my friend.[/QUOTE]

I have to join those hoping for OCZ’s survival as an independent company. They have indeed brought immensely much to the table in regards of cutting edge technology, performance, bang for the buck, and last but certainly not least; an unprecedented support forum community for SSDs.

I have frequented the forums of all the major brands, and they could never quite reach up to the level of OCZ.

I never bought an OCZ supply that didn’t get replaced under warranty. I thought their customer service was pretty good. They certainly had plenty of experience in returns.

They have their ups and downs. I have their Agility 3 SSD, it’s been working fine. But I’ve read horror stories about their other SSDs.

Toshiba sells their own SSD. Since this is not a discussion of philanthropy, what would Toshiba get in return from OCZ? Support forum? Surely the last thing Toshiba would want is some South Koreans living next to Samsung’s SSD headquarter. They are former Indilinx employees, now working for OCZ.

From what I see, Toshiba’s own SSD is both cheaper and better than OCZ’s SSD made of Toshiba NAND. The real problem is that some of Toshiba’s fastest SSDs are cheaper than some of OCZ’s cheapest SSDs. Vertex 150 is good, except in princing, and low price, not quality, not support, not technology, was the very thing that enabled OCZ to have a niche market in the first place.

I don’t see how OCZ can increase market share unless it sells 500GB SSD for US$300.

If Toshiba was to buy OCZ, then they would get Indilinx, which is arguably the most powerful consumer grade SSD controller, and certainly much more powerful than anything Toshiba has at the moment.

IMO, if it wasn’t for OCZ, and the first Indilinx controller, we wouldn’t be here discussing this, because SSDs would still be out of reach for most people on price alone.

Personally, I would rather OCZ stayed an independent company.

Indilinx was a minor name during the early years of SSD development, partly because it did not even exist during the first few years of NAND-based SSD. 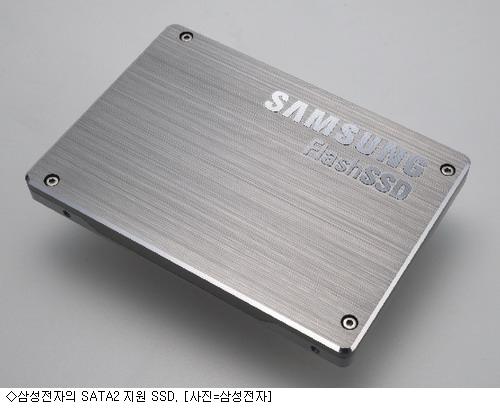 Intel visiting Mtron, Samsung, and ONS of South Korea (Mtron made SSD controller, developed and sold SSD for servers and PC, Samsung made NAND, SSD, desktops and laptops, tablets and smartphones, servers, and ran hundreds of businesses that ran those servers, ONS made some of the world’s first 2U rackmount type servers running RAID-1 NAND SSDs made by Mtron)

And even older, Mr. Hwang, the former Samsung executive, in 2005

Why did Mtron fail while Indilinx survived? Mtron tried to compete directly against Samsung and Intel, but everyone inside South Korea knew quite well Samsung had been years ahead of Mtron and it was Hwang himself that lead the development and popularization of NAND and SSD - it was also in these years Steve Jobs at Apple met him to discuss NAND and SSD - so it should have been obvious nobody wanted to invest more into Mtron. Why Mtron actually disintegrated was not publicized in detail. Hwang quit his job as the head of semiconductor business at Samsung to save Lee Gunhee in 2008 from the regime and other forces that tried to destroy Samsung in similar ways they destroyed Daewoo and Hyundai. Under his leadership, Samsung experimented SSD in desktops, laptops, servers, and other types of devices for some years and it was soon widely known that Samsung employees were using laptops with Samsung SSD inside, not for sale yet. That was before 2005. Hwang announced his intention in September 2005 - quite an unlikely action for a Korean, but then he was educated at Stanford and worked for Intel. Indilinx was started by three South Koreans living near the headquarter of Samsung in late 2006. The key people of Indilinx were all those that spent around ten years working with flash semiconductor and flash storage.

But how could Indilinx survive when a much bigger and much more complete player, Mtron, failed ending in a disaster for all (except Samsung itself)? Easy, Indilinx needed to feed only far less than 50 people. And since they just developed the controller, they didn’t require US$100,000,000. What they needed was more like one hundredth of that. Since Indilinx already had an office in Silicon Valley, it was relatively easy to keep in touch with OCZ and OCZ was Indilinx’s largest customer. OCZ bought Indilinx and Indilinx, or its owners, became a large shareholder of OCZ in return.