My daughter was cleaning her room, and knocked over her PC monitor, cracking the panel.
It’s quite old and not worth repairing. It’s an Benq 24 inch 1080P LCD.

I’ve ordered an Pixio PX277 Prime to replace it.
It’s a 27 inch IPS screen with fast refresh rates, and quick response time. I believe it uses an LG panel.

Anyone using one? Or just your thoughts.
Price; £319 from Amazon with Prime delivery.

The resolution, size, and refresh rate make the PX277 Prime the ideal gaming monitor. The 2560 x 1440p display paired with a 165Hz refresh rate is now the standard for modern gaming. The slim, bezel-less design also provides a space-saving solution...

This one might save you a bit of money@299 USD

Too large. Even a 27 inch is pushing it.

I’d always start with a price comparison website and select the requirements that I have, like min. and max. size, refresh rate, resolution, panel type, etc.

For UK Skinflint should be a good start and once you have a couple of monitors selected, check reviews if available. I wouldn’t only be looking at the price. You (or rather your daughter) wouldn’t want a cheap but crappy monitor.

Normally I would go to a store and see a monitor in the flesh, but that isn’t possible at the moment with this pandemic, and all but essential stores being closed.

We spent most of Friday evening researching what was available online, and what was actually in stock, and available.
She had a budget of £300. So looked at monitors in that price range. We narrowed it down to three, having read reviews from some sites, and having watched reviews on Youtube.

At that price range you’re not going to get something high end, but the Pixio PX277 ticked the boxes on what she required.
In the end I added £20 to her budget so could get something that she really wanted, but couldn’t quite afford.

If it doesn’t meet her expectations. Amazon UK return policy is second to none.

A typical review of the Pixio PX277/ 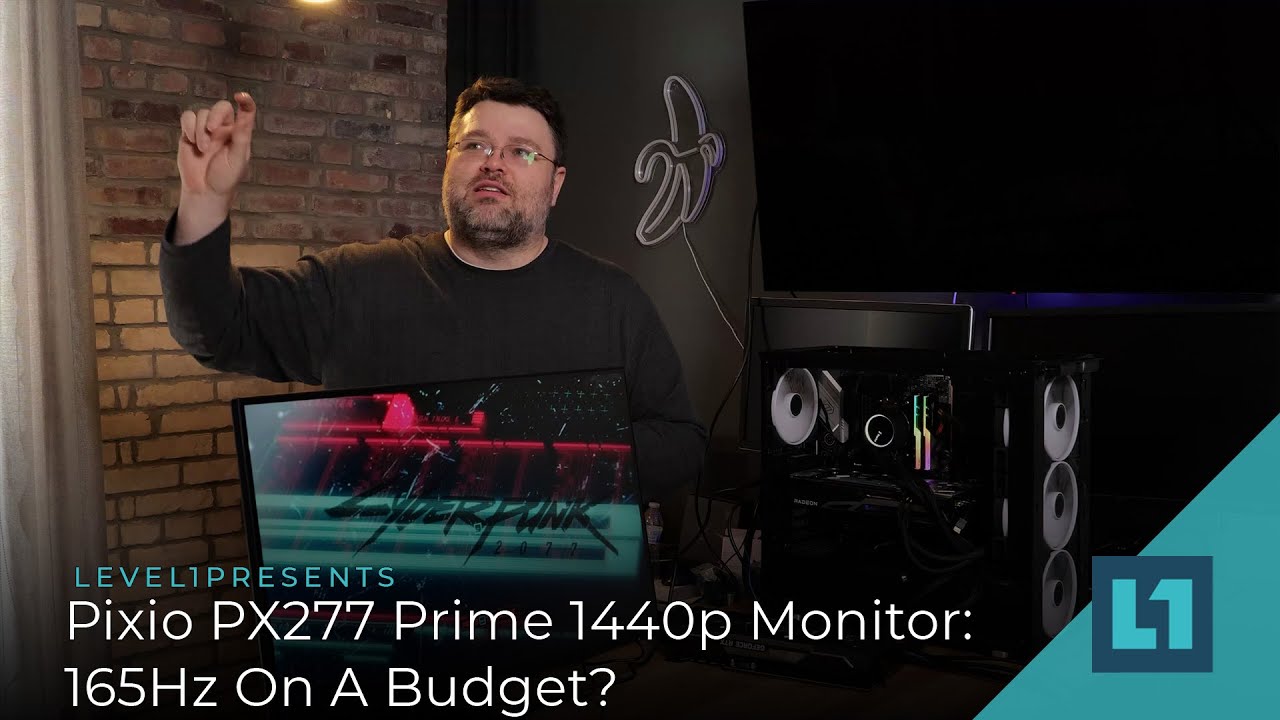 ; but if it dies, then naturally it’s probably not worth fixing unless it’s a dirt cheap fix and at this point ill just move onto something newer but even then I suspect ill probably stay as close to $100 as possible, maybe $150-200 tops. I think I paid around $220 for my current 24" 1080p LCD in early 2010, but nowadays one can get a decent monitor for probably in the $100 range, or not much over that.

even when I eventually build another computer, while ill see how things are at that time, but as of now there is a good chance I would just use the current monitor to save $100+.

Too large. Even a 27 inch is pushing it.

Too large as in won’t fit in a area you need it to fit?

because while I don’t mind my 1080p 24" monitor, if mine ever dies, depending on cost, I would probably not mind something a bit bigger as I doubt I would complain going from 24" to 27", maybe even a bit larger.

but at the same time… come to think of it, I guess after a certain point I would agree with you because if your sitting pretty much in front of the screen, like I would imagine is typical on a desktop computer, we generally ain’t going to want nothing too big like we generally would with a typical TV where nowadays people probably want a bare minimum of 40 something inches where as that size for a desktop monitor would be WAY too large and not really practical. so I guess in this regard I would guesstimate probably no larger than high 20’s, maybe low 30’s tops.

but from my best guess… I would guess somewhere around that 27" would probably be my sweet spot as while my 24" does not bother me at all, I would not mind a little larger if given the choice to buy another one and the price is good (say around $100 as I figure one is probably going to have to spend around that figure at the minimum to get a decent monitor).

but with all of that said… enjoy your new monitor, whichever you end up going with

enjoy your new monitor, whichever you end up going with

It’s for my daughter, not myself, and its already ordered.

Too large as in won’t fit in a area you need it to fit?

It’s going into her bedroom, which has limited space. She would be too close to larger display, and nowhere to get further back from the display.

I am not sure but I think Freesync is for AMD cards and G-Sync is an Nvidia thing.

Correct. Freesync for AMD and G-Sync for Nvidia.
it actually does both. It’s just not certified for G-Sync, as they would have to pay NVidia to put the G-Sync logo on it.

My daughters Pixio PX277 arrived today, and she set it up herself.
She had used the HDMI she already had, and she could get it to run at 60Hz refresh rate, but not rated 144Hz while connected with HDMI. It’s a cheap crappy cable which worked fine at 75Hz on her 1080P monitor.

So I replaced it with the supplied Display Port cable, and it synced at 165Hz no problem.
Out the box it was calibrated not to badly, but a little tweaking with my favourite monitor calibration utility had it looking very nice indeed.

It’s not perfect when compared to my Dell pro monitor, but pretty damn good considering it was less than half the price.

Everything works as it should, and yes G-Sync works perfectly.
Not bad at all, and she is very happy with it. A high refresh rate monitor with a fast response time certainly makes games look very smooth on her RTX 2070 Super GPU.

Probably sooner than later,and may never want to go back to smaller, I know I don’t.
I can not handle anything smaller than 27 in anymore for years now.

Having seen this Pixio PX277. 27 inch display. I may be tempted to get one for myself for the DAW machine.

She had used the HDMI she already had, and she could get it to run at 60Hz refresh rate, but not rated 144Hz while connected with HDMI. It’s a cheap crappy cable which worked fine at 75Hz on her 1080P monitor.

Thanks for the info as ill have to keep that stuff in mind in the future.

but, at least as of now, I use DVI for my PC monitor and HDMI to the TV. I wonder if one of those DVI to Display Port cable type of adapters will be a problem or not in regards to refresh rates? ; because assuming I eventually upgrade but keep my current monitor ill have to use some sort of DVI connection to the GPU and I was told many decent GPU’s nowadays don’t offer DVI connections straight up.

It’s not perfect when compared to my Dell pro monitor, but pretty damn good considering it was less than half the price.

Exactly. in my mind it’s generally all about bang-for-the-buck.

That’s one thing I have yet to see as I heard a little about it but I guess it’s one of those things that’s hard to describe but you can see the difference (or is it somewhat negligible(?))?

because I am still used to the general standard of 30fps or so is playable and 60fps+ is liquid smooth. it’s just hard for me to imagine something being noticeably better (like a worthwhile difference) going from the 60fps+ standard (on your typical 60Hz or so monitor) to that 165Hz. my guess, even assuming it’s nice and that I am underestimating it a bit, won’t be nearly as important as the difference is from say 30fps or so to 60fps. I suspect it’s one of those nice luxury options though

p.s. maybe times are changing but at least as of years ago when I used to play them a bit more heavily (call it roughly 10-15 years ago+) it seemed like there was not many females playing video games.

Yeah, I am sure I would as I can’t see going from 24" to 27" being a bad thing. I would imagine it will make things easier to see to which has to be a good thing as even the youngest of us will age and our eyes will get worse eventually.

I wonder if one of those DVI to Display Port cable type of adapters will be a problem or not in regards to refresh rates?

That’s one thing I have yet to see as I heard a little about it but I guess it’s one of those things that’s hard to describe but you can see the difference (or is it somewhat negligible(?))?

The difference is night and day. Much more so than I had imagined until I seen it.
But it’s all relative. 27 inch screens are best suited to 1440P rather than 1080P. That requires considerably more CPU and GPU grunt than you currently have. So there is no point in having a 1440P display @165Hz if your CPU and GPU can only manage something like 40 FPS on a modern game.

Well I caved in and bought one of these Pixio PX277 monitors for myself for the DAW machine.
My DAW isn’t used for games, so the GPU is quite modest. An NVidia GTX1060. It’s only in there because the RyZen 1700 doesn’t have an iGPU.
But when I was calibrating my daughters monitor, I noticed the 165Hz refresh rate made moving open windows around the desktop also very smooth.
I also wanted to move from a 1080P screen to a 1440P monitor to gain the extra real estate for my Protools.

Anyway it arrived today and just finished setting it up using the supplied DP cable, and then calibrated it.
It wasn’t a one-off that my daughter got a good one, as this one is also very good.
Protools looks great, and I’m also very happy with it.

So there is a case for having a high refresh rate monitor for normal applications. Even on a system that doesn’t have a powerful GPU.

I’m not suggesting the Pixio PX277 would be a good option for serious photo or video editing. The colour isn’t accurate enough for that. You need a pro grade monitor for that.
Still good enough for viewing photos and video’s, but just not a pro grade solution.

I bet you will love it. Good luck with it Wendy.

Oh sad. Mine is still in mint condition so I am happy because it supports also 15kHz which is inevitable useful for retro (amiga, st etc).

Good luck with the new one!!

Having had a few days to play with this monitor. I’m very impressed with it.
On my DAW machine, going from 1080P to 1440P has made a huge difference. I can now see much more of my project without having to scroll down or up, or left and right.
The high 165Hz refresh rate and fast response times also make the screen a lot less tiring on the eyes.

My daughter feels the same way about hers, and she is very happy with it.