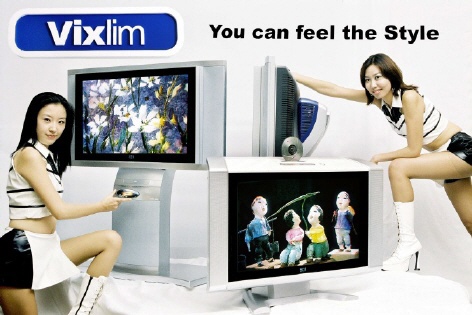 Announced on Monday, July 19 in South Korea. Samsung SDI’s saying the new technology is appropriate for South Korea’s “national digital TV project” that the government and industry has supported recently. The TV set will be as slim as HDTV made of LCD flat panels of the same screen size according to Samsung SDI. Samsung SDI’s a different company of Samsung group from Samsung Electronics.

Wow now that’s aTV!! I really am beginning to like Samsung and the way they design their products. Looks like the Pedestal has a DVD player or recorder in it too.

Wow now that’s aTV!! I really am beginning to like Samsung and the way they design their products. Looks like the Pedestal has a DVD player or recorder in it too.

I didn’t notice it. Most people won’t notice it unless they are told beforehand because they’ll first see the other two legs.

Samsung’s recent success has much to with their “higher-end” products with enhanced design. For a few generations, they were for the mass who just want the cheapest of the cheapest possible. Around 1997 and 1998, Samsung had to sell part of their shares to overseas investors. They had to restructure anyway. One of the main restructuring was to give up the low-end market and concentrate on the high-end market. Only since 200 or so, we could see expensive mobile phones, expensive Samsung DRAM chips, expensive Samsung LCD and PDP monitors pouring into all markets around the world. They invested billions of dollars each year on LCD alone, spending multi-billion on the latest LCD plant with Sony somewhere in the Chungchong province of South Korea. I mean even Sony began to have some respect for Samsung which was simply unthinkable in the 1990s.

But I’d like that to be an HD recorder than DVD recorder or player on the pedestal.