Bet you have been waiting for this

Got the Pioneer 107 few hours ago so it’s just a few tests so far.

!Update!
Review delayed until I get fw 1.09 due to some problems I have with version 1.05.

Princo 4x (new batch that have worked perfect in all drives tested so far). 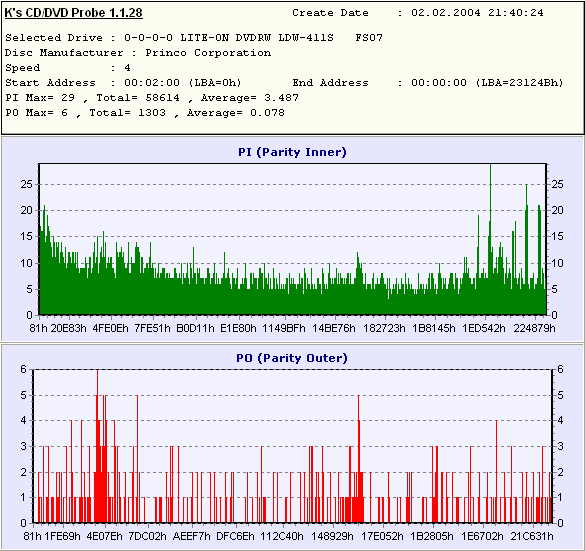 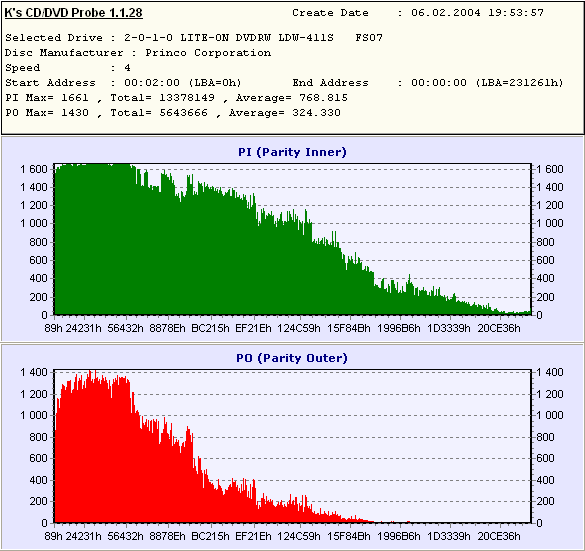 Note: The pioneer scan is done at 1x as the LDW-411S refused to read at higher speed!!! 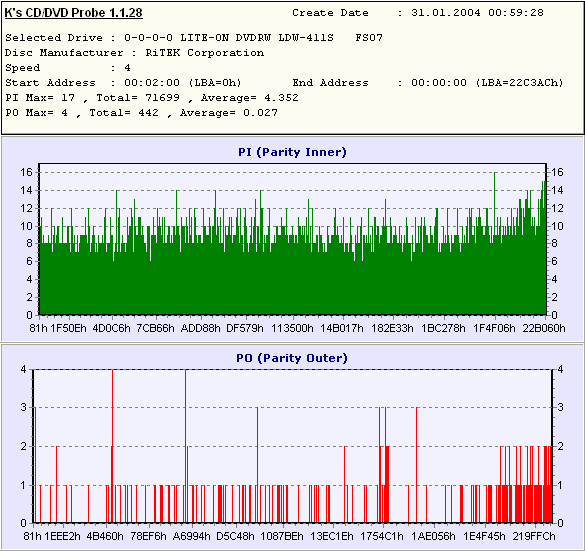 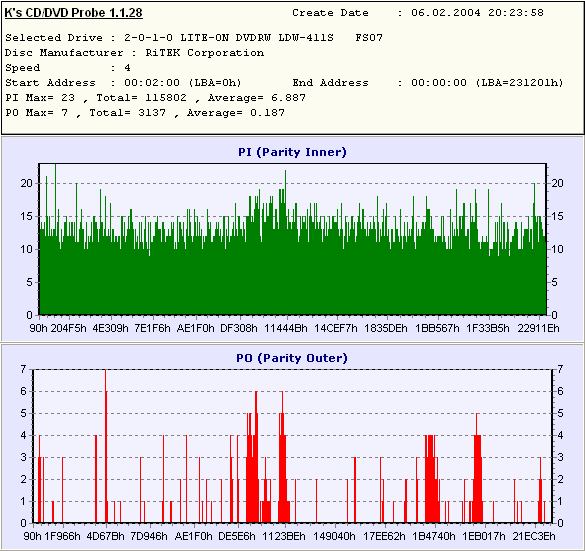 NEC is close at scoring again, but the difference is not large enough to make a difference in practical use. 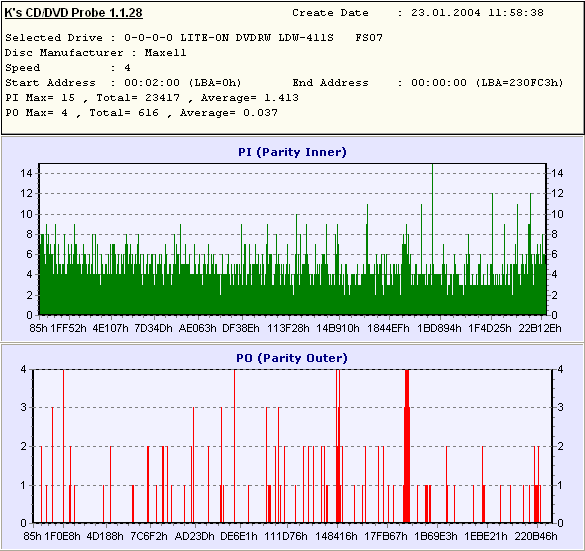 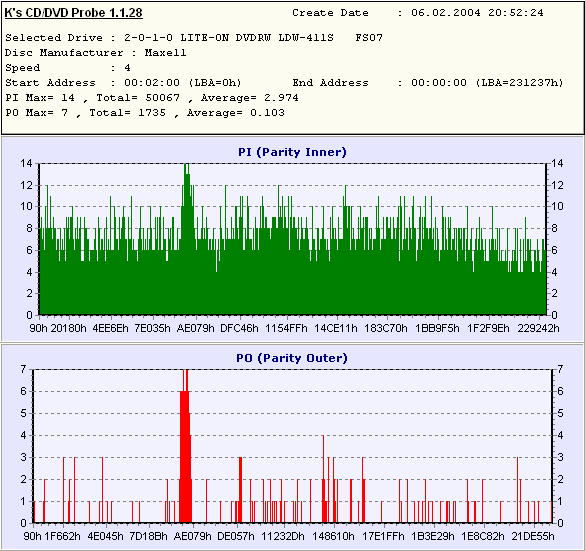 NEC was in a good attack, but again the pioneer guys stood strong. No score this time either as the difference is to small.

A dead run, but in footbal we could say that the NEC had more chances at scoring

Wait for the final battle (review) where the Pioneer will try to fight back at the NEC ND-2500A!

I hope you don’t have those 2 drives in the same box, could get messy when they get to fighting.

Thanks OC-Freak. That was yummy.

Umm, all I need now is some 8x DVD-R discs. Hmz, to bad that the pioneer do not support writing any 4x discs at 8x…

great review teaser OC-Freak!
the way these 2 are going after some firmware releases i think we’ll be seeing almost perfect results in a great range of media

Not really mate, maybe its time you and your sycophants just acted a bit more normal. Did you cop one up the wrong’un or something when you was in the army because you aint half turned in to some kind of ultra loves himself.

Maybe your Mark Twain quote was self respective? You have gone from being very helpful to an â€œI canâ€™t be wrongâ€ kind of chap, what a crying shame.

No doubt this is a ban but what the hell.

First of all, if you have nothing non-offensive/polite to say, then I would just keep it to yourself. Most of us come here in search of information. We read and interpret people’s perception/opinion of hardware so that we, as consumers, could make a more educated choice in our purchases. Comments like yours do nothing more than breed a sense of animosity and are actually counterproductive. If you have nothing constructive to add to this discussion, then please do us a favor and don’t participate in it. Nobody here is interested in reading threads that are filled with personal attacks.

Congratulations, you managed to put both feet in your mouth while kissing your own @sshole.

I’ve never seen this done before.

@OC-Freak,
if you get a chance, could you try burning a RICOHJPNR01 on the Pioneer 107?

I get extremely poor burns with these DVD+R’s

Pioneer Aus Tech Support replied initially saying that this would be corrected in the imminent firmware update, and then replied a little later saying “if you are having problems use different media”

Originally posted by I Have Piles
[B]Not really mate, maybe its time you and your sycophants just acted a bit more normal. Did you cop one up the wrong’un or something when you was in the army because you aint half turned in to some kind of ultra loves himself.

Maybe your Mark Twain quote was self respective? You have gone from being very helpful to an â€œI canâ€™t be wrongâ€ kind of chap, what a crying shame.

To be honest I don’t see your reasons in thinking so. You have for long time been a respected member of this forum so I would really like some insight in what I’ve done wrong to make you feel like this.

Is it because I’m less online at the forum posting new guides and replies to threads? (this is due to my crappy 33k dialup connection). Or is it something with my reviews?

I have no problems admitting own mistakes, so I do not think that is a problem. But as said you’re a respected member so I’ll not ban you. You’ll instead get a chance on explaining what you think I’m doing wrong, and how I could improve.

Do these scans actually mean anything though?

LIke when you see NEC 2500a looking so good at so many scans, what are you supposed to take from this. Well maybe that it would be the most compatible with media. and other machines reading those written disks would also have a great compatibility. But this doesn’t seem to be the case. Many people are having problems with the 2500a and cheap and intermediate media. I haven’t read enough to remember if people have problems playing back media from another device that writes ok

And the other problem is, that your 2500a and rdgrimes’s 2500a doens’t appear to represent most other people’s 2500a. In that you have no problems writing to disks that others do, including a friend of mine, even though they went back to the same firmware as you.

I would very much like to buy the 2500a over the 107 for the cheaper price and the overclocking of 4x media that 107 doens’t do. But also want the drive to be reliable with cheap media and burn to said media at it’s rated speed. Buying a cheaper drive which requires expensive media doens’t make sense to me.

But thanks very much for doing this. Such a shoot out I"ve been looking for a long time, I just wonder if your 2500a is somehow different to the ones being sold now though, and as such we’ll have problems where you aren’t having any. That’s my only worry.

The pioneer may for sure be a better drive, it’s to early to say yet.

I have another review to finish up before starting on the pioneer so I’ve not yet ran more tests than those posted here. The pioneer is not even in my computer at the moment.

Yes I agree - it’s trange that other people have so much worse results than me and rdgrimes with the ND-2500A, 70% of the complaints have been with ritekG04 media though, I’ve seen a few other media complaints as well, but for the most part it’s limited to ritekG04 media - and this is just one media type out of many media types available.

isn’t this difference most likely caused by different batches of the same media?

Originally posted by ssjkakaroto
isn’t this difference most likely caused by different batches of the same media?

I would think so, but there is quite many with ritekG04 problems so ity’s hard to be completely sure about that.

I’ve said this before (in another thread), but it could be said again:

You know, it never ceases to amaze me the number of people who justifiably spend countless hours researching for the “best” DVD burner available, purchase it, and subsequently end up nulling that burner by purchasing substandard media. But what is more unjust, is that the burner of choice is then given a poor review/opinion because it fails to perform up to its expectations.

Moral of the story: If you are going to put forth the effort and money to purchase the “best” burner…don’t go buying the crappiest/cheapest media for it. It is not the manufacturer of the burner or the burner’s fault. Remember: “Crap in = Crap out”

Personally, I use Taiyo Yudens. Yes, alot more expensive than those $0.69 per disk specials, but a whole lot more reliable. I have yet to burn a coaster with any of my burners (Sony DRU-500A; Lite On 411s; NEC 2500A).