So i just built a brand new computer for work in February but am now caught up in the Sandy Bridge recall fiasco. Luckily I bought everything from New Egg so they have been very helpful and are actually sending me a replacement motherboard for free (which i assume everyone is getting now).

My question is this…

Am i going to have to reinstall my entire system for this new motherboard? Or will be a simple swap out and update the driver? The reason i ask is that i have so many damn programs and files on my computer that it takes a good week to get it back to normal and i cant afford to be down for another week at work. Am i screwed or is it a simple swap out?

If it is the same model motherboard, just updated to fix the SATA controller flaw, then you should have no issues replacing the board.

You will most likely have to reactivate your Operating system installation.

but thats it? just OS reactivation? i can handle that… thats all online automated right? or would i have to call microsoft for that? thanks

It may or may not require reactivation…but if it does, you should be able to do it online.

so do you think it’ll be an all new reinstall now?

No, I don’t think it will require a reinstall of the operating system, but the more it differs from the original board, the more likely it will be that you’ll have to reactivate.

As long as you have a legit copy of your OS, probably some version of windows, all you should have to do is reactivate MAYBE, depends on how different the board is which sounds like it isn’t except for some updates to fix the original issues.
You probably wont have to change anything, drivers , whatever seeing how it’s basically the same setup as before.
Plug it all together and boot it up and see what happens, maybe it will want a online reactivation, maybe a driver but I’m betting it will just boot and be happy.

Well, I do know that when I kitted out my computer with another hard drive from another computer, the computer BSoD’ed over and over again because Windows could not boot from the hard drive, as all of the drivers had been set to my previous computer.

Unless you can obtain exactly the same board (where all the drivers are aligned, a simple switchout should be no problem) My simple answer, if I understand this right, would be to copy over all of the essential files onto CD/DVD, hard drive, flash, whatever, and them completely wipe the computer with a fresh install.

Remember though, once you replace your motherboard, Windows recognises the computer as entire enough machine - Whereas everything around it, DVD Drive, hard drive, RAM, etc are all upgradable without any scuffle with Windows.

That’s a bit of an extreme tactic, but I prefer a fresh start for a new MoBo.

thanks. yeah, in a perfect world i would fresh install for sure, but i cant afford being without this computer for even a day… if it comes down to it, then yes i would have to but id rather not if not necessary… my plugins alone take an entire day to install… thanks

To be honest dude I think you might have to. If your kitting out with a different motherboard, you most certainly will have to. If its the exact same model no worries, since your computer is customised for that motherboard anyway.

well, the new motherboard is in… seemed like everything went ok WITHOUT a full reinstall… but now im getting issues left and right… one of whch being a monitor flashing issues and still having networking issues as well. oh well. worth a try, now i just need to find some time to wipe and install this thing again…ugh!

thanks for everyones help!

Hehe, no worries, at Club MyCE were always happy to help a fellow member out"

I don’t suppose you know your way around Linux, but if you can’t boot into Windows it might be worthwhile booting into something else (Like Ubuntu), pull all the neccisary data off, reinstall and then put the data back on.

Infact, I did that earlier this afternoon - Got fed up with Windows after it was playing havok with my graphics card so I dumped it for Linux - Boom, works straight away with the card, not looked back from Windows since!

This must be my third time migrating from Windows XP

Well make sure all your drivers are up to snuff and wring it out afterwards before you give up on it.
I’ve had some very strange problems that were down to driver issues before.
BUT now I’m getting a not enough amperage from the 12 volt rail to run my new to me 4870x2 video card. All is perfect till I go to run a game then the machine will suddenly power down and I have to turn off the power switch on the back of the supply to reset it.
The card can draw over like 50 amps on the 12 volt rails it uses and the supply can only do 18 amps per rail so it shuts itself down to protect everything when the card ramps up in a game:sad:So for now I either have to disable the extra core or turn the card way down to get it to run till I get a EVEN BIGGER power supply:rolleyes:and I’m running a top notch 750 right now.

You need to get the PSU I just got 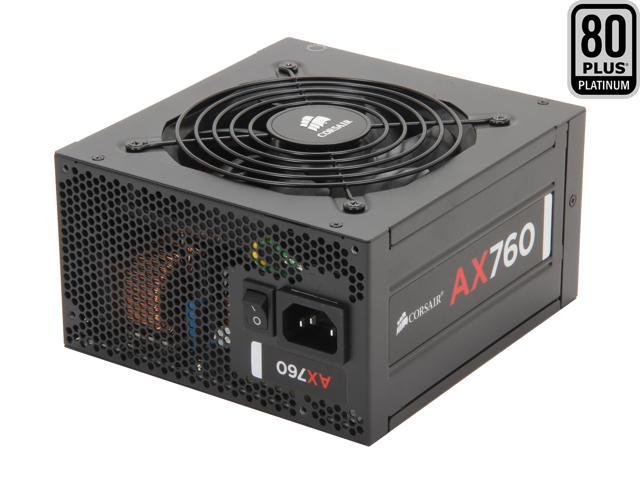 Most any single rail 850W PSU will have the amps for the 4870 dual card as well as your other components that will draw from that rail.

The Corsair AX850 is a great one as well as the NZXT Hale 80 Gold, and anything from Seasonic, Enermax, and Cooler Master but check out the specs for the Amps on the 12V rail to ensure it has at least 70A.

You didn’t do it right the first time, so you are still getting the same error messages. Starting fresh is a good idea, a MB is a major Hardware upgrade and doing it from scratch is the only way. Like I said, you put it on your Workbench and work your way up. Don’t take any short cuts and do everything to the letter. Building Rigs is a precise undertaking, do it right the first time and you will be rewarded.

Thanks guys, I do plan to get a better PSU eventually but for now the money just isn’t there so I guess I’ll have to wait a bit till I get Crysis 2 and go nuts for a while. My geek friend who gets me all my goodies, usually his leftover systems he builds for himself to test out the latest toys was telling me I needed a 1200 or so, probably that one Allen got as it was about the same price.
I have a Nspire Xtreme 750 now and until this card I never found anything that phased it one bit. It’s the same one as the Thermaltake Tough power 750 modular just from the OEM.

Several studies were done when the dual 4870X2 cards first came out and they all came up with the same facts.

Energy consumption jumps a lot when the video cards are stressed under a 3D gaming load in 3DMark06. In this case, the total system power draw for the Palit HD 4870 X2 test platform rises to a peak of about 421W.

That’s a change of about 245W when this dual card is working at its peak. Keep in mind that some of this additional power is being drawn by the CPU and memory, but it looks like each of the two GPUs on the card is approaching 100W of power burn at least.

As a general guideline, since power consumption will vary with the demands and components of individual systems, but it’s fairly obvious from these numbers that as a minimum a 600W would be recommended, however, once you add in the variables like additional drives and other power draining peripherals I would recommend an 850W with a single rail with a high Amp output on that rail.

I have been reviewing PSUs for Enermax, SilverStone, NEXUS, NZXT, Sentey, ULTRA, Seasonic and others and I always test every 850W or higher unit with HD5870s in CF or GTX570 or 580s in SLI on an i7 930/950 test system with an OC of 4.0GHz and have yet to find a single 12v rail with at least 58amps and 850W unit from any of these respected companies that would even break a sweat under my test loads.

So, save a little cash and take it a little easier on your electric bill at the same time and before you know it you will have enough saved up to upgrade that card.