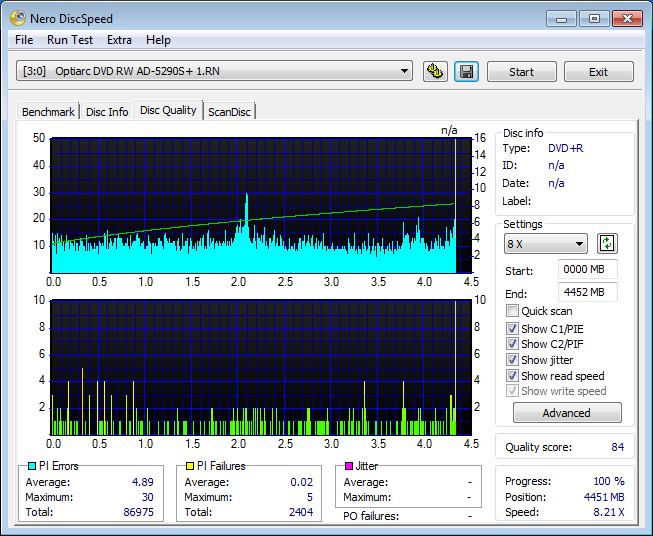 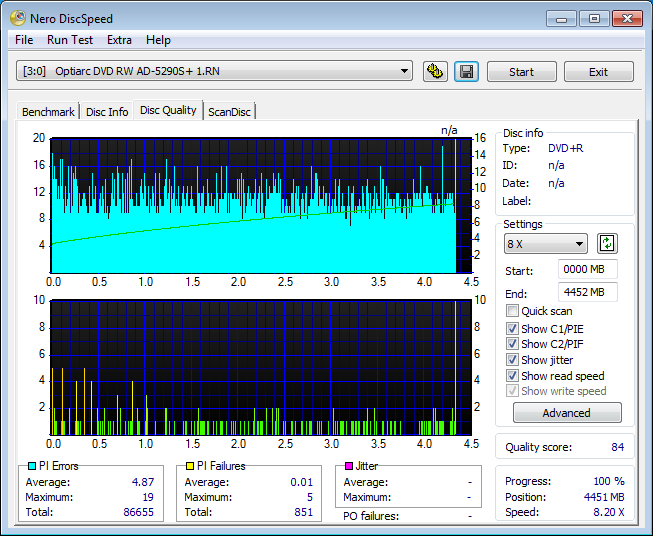 The Optiarc-burned looks morw worse, those PIF-spikes reminds me more on some issues of several DVD-writers with DVD-R

Hi, correct! I have seen some discs with dye problems on these Verbatim 95037

The Optiarc drive its working perfectly. 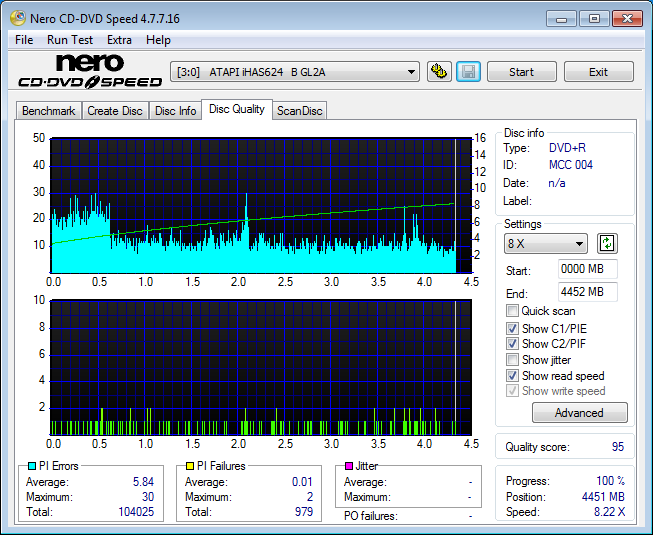 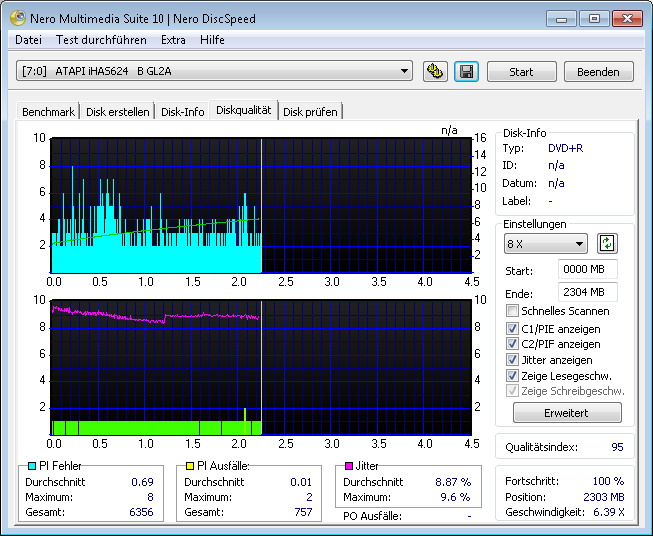 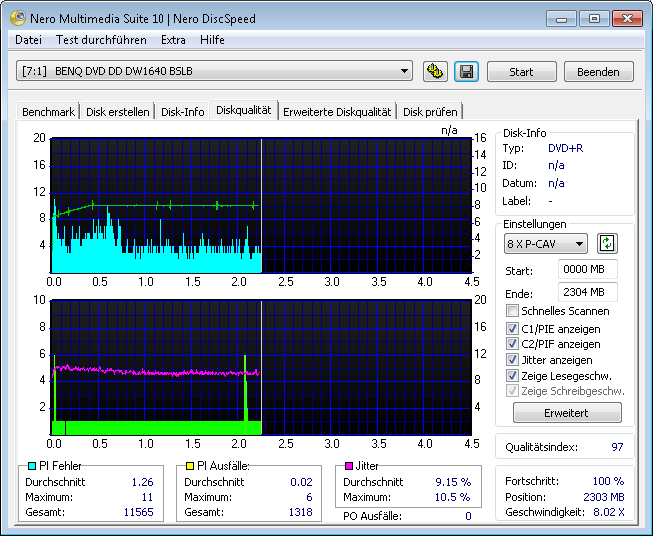 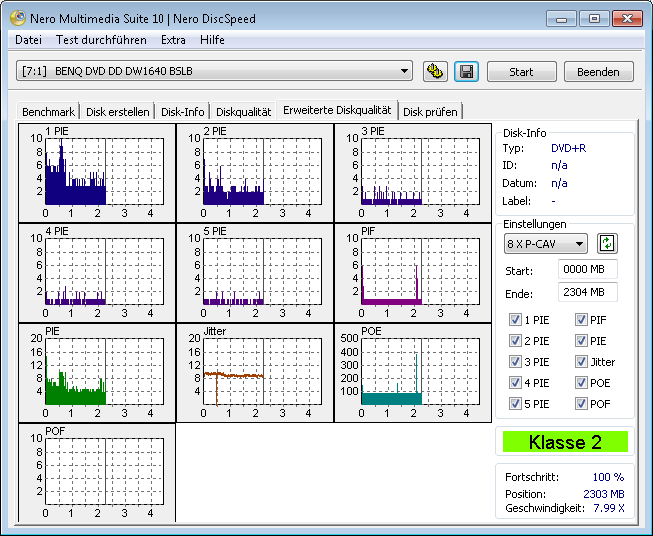 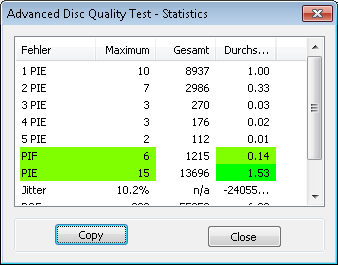 Direct recording with 1x or High speed dubbing from HDD?

OK, 1x speed. I had similar PIF-values with some recorders

Maybe it’s even 0,5x speed? Because in SP the capacity of a single layer DVD is 2 hours.
Or the recorder pauses writing every time until the RAM is filled and records with 1x then.

I would think there´s no supported speed <1x, so my guess it fills the internal buffer (or uses HDD?) and write it at 1x if the buffer is full 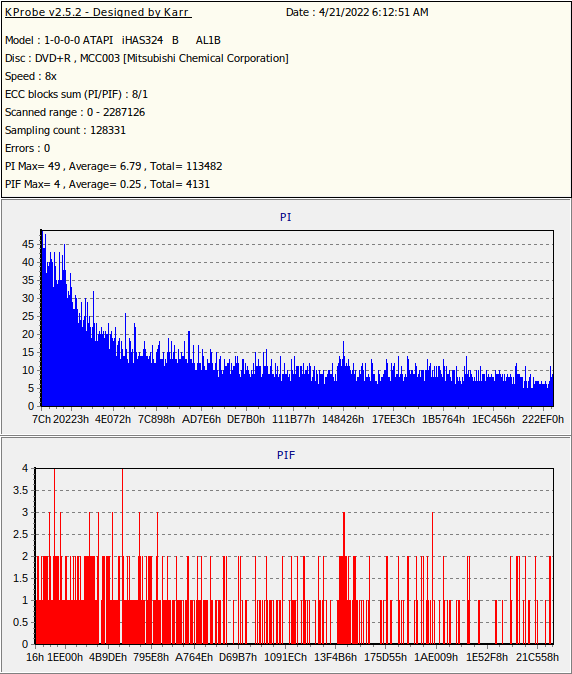 p.s. I burned four discs from the 200 discs so far and that was the best scan. on my Optiarc 7240s burner at 8x write, while burn quality was generally similar to my posted KProbe scan here with the iHAS-324B drive, it had a brief 800 PI spike at the beginning which ruined a otherwise solid burn. trying another disc at 6x on the 7240s lowered the initial spike to within acceptable PI standards (159 peak spike, but average is 24.60) but the overall burn quality was weaker than it is at 8x. I even tried on my original DVD burner, Liteon 1673S (from 2005), and while it’s PI’s were still within safe enough standards (124 PI peak, 23.02 average), the PIF’s near the end of the disc were solid red on 6 and hit peaks as high as 16 etc. but all four of the discs I burned so far are readable on all three of my DVD burners and the discs should be solid enough, especially considering they are probably around 17 years old(?) and if they still work reasonably well by now, they are probably going to be stable long term (i.e. years/decades from now).

EDIT (Apr 24th 2022): I have burned roughly 33 discs out of the initial 50-pack so far (two discs I had to toss in garbage because of scratches as they failed verify in ImgBurn but none of the 33 I have burned failed to pass the basic ‘verify’ in ImgBurn) and, in short, I would consider about 4-6 discs as potentially suspect based on the KProbe scan on my Liteon iHAS324B drive as the PI’s of the discs I would be a bit concerned about are typically in the first 5-10% of the discs with PI’s being about 674/506/617/462 and maybe 343/828 but that 828 PI spike was very brief and the 343 was a bit longer but still pretty brief. but in terms of those ‘suspect discs’ PIF’s, while things are not optimal, they are probably not totally bad either (and in terms of exceeding ‘4’ it’s typically in that first 5%, maybe 10% of disc)… 6-9, 6-8, 5-6, 5-7(brief 9) ; reason I am not TOO concerned with these PIF numbers is because on one disc where I had actual failure on ImgBurn’s ‘verify’, and sent those discs back to Amazon, is the PIE’s on that disc that failed to ‘verify’ only topped out in 250-369 range BUT the PIF topped out at a much higher point as I would guesstimate the last 5-10% of the burn was anywhere from a solid 10+ to around 30 or so with a single spike or so hitting 76. so even if we assume the disc failed before the spike of 76, I would guesstimate read error probably occurred when the disc was reached a SOLID 20+ PIF as I would guesstimate roughly the last 5% of that disc was a solid 20+ PIF. even disc that exceeded PIF 4 (putting aside very brief spikes above 4) there was only 4-5 discs that ‘might’ be a bit suspect. 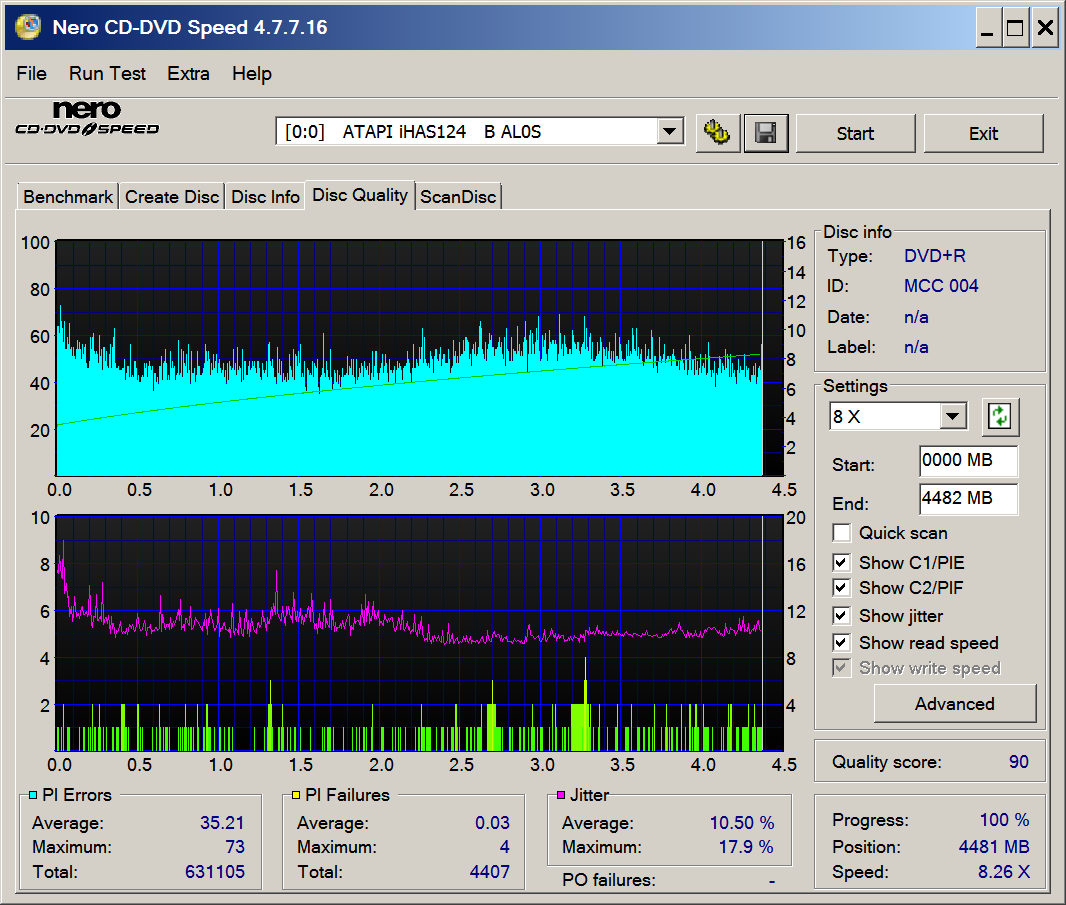 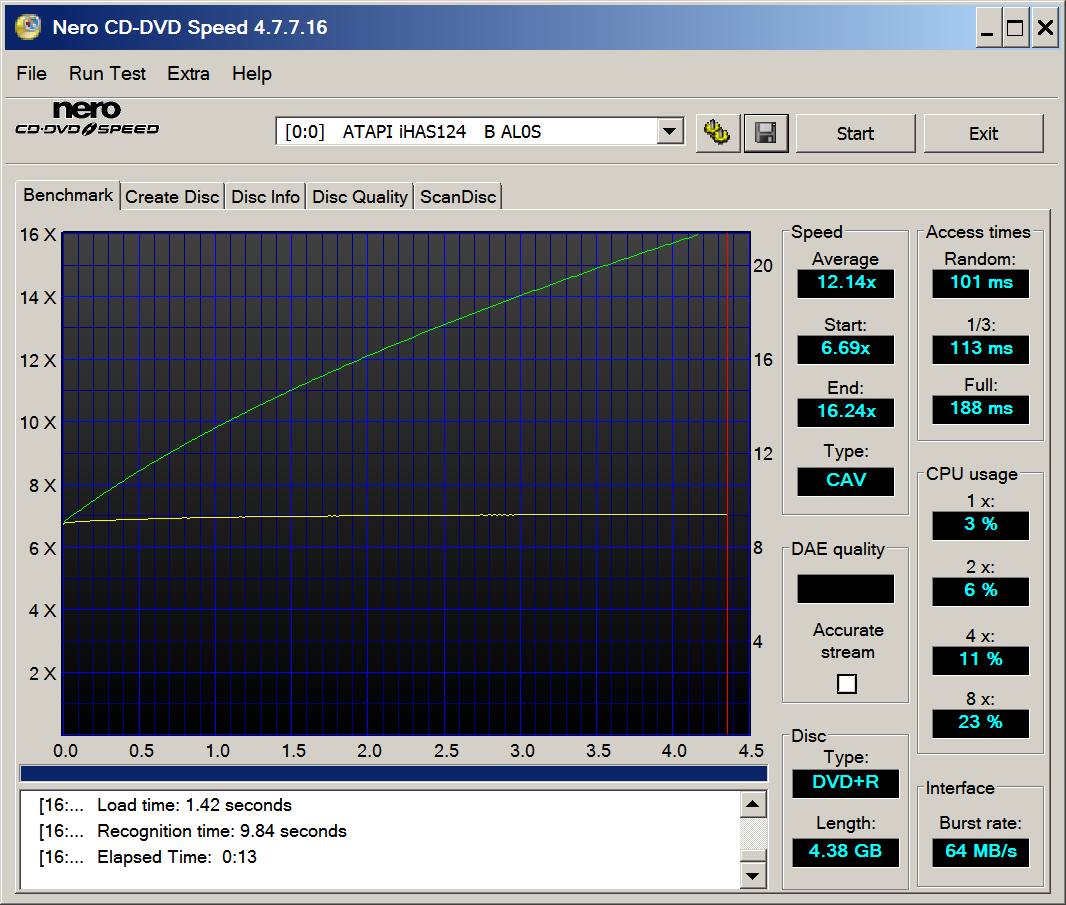 Are the newer batches more worse? These PIF-clusters looks like dye defects

The following is a burn (MCC 003) and scan from April 21st 2022. burned on a Liteon 1673s (from 2005) at 8x which is basically the worst overall burn so far of that batch of 200 MCC 003 discs I bought earlier this month here in April 2022 as the total PIF’s are pretty high at about 41.5k and even the peaks near the end of the disc are even worse. it’s the only disc I tried burning on that old 1673s burner as I have largely been using my iHAS324B when burning (with a bit burned on my 7240s) since it seems to be the safest as short of maybe 4-6 discs being of a bit more suspect burn quality, the rest are easily more on the higher quality side of things.

but basically my iHAS324B burner can copy the data back to hard drive at max speed, which takes very close to a full 5 minutes either way (which is typical/expected on my drives when reading at max speed the whole way). but that same disc when put into my Sony Optiarc 7240s burner (from 2009), while it ultimately reads it, you can tell it can’t easily read it (since you can hear drive speed up and slow down fairly often throughout the disc and it never really stays ramped up. probably 9-10MB/s typical (tries to go higher occasionally but does not last long before returning to that 9-10MB/s range) but I think late into the disc it’s probably, as a ball park, 4-5MB/s tops near the end when normally that would be at it’s fastest) like the more typical higher burn quality I usually get at which point it reads those discs at max speed as expected.

I confirmed the file was good since I ran a ‘sha256sum’ hash check on Linux Mint and confirmed the original file (which is nearly a full 4.7GB) and the ones copied back to hard drive on the iHAS324B and 7240s are identical, so I know there is no data corruption and both the 7240s and iHAS324B ultimately read the disc. 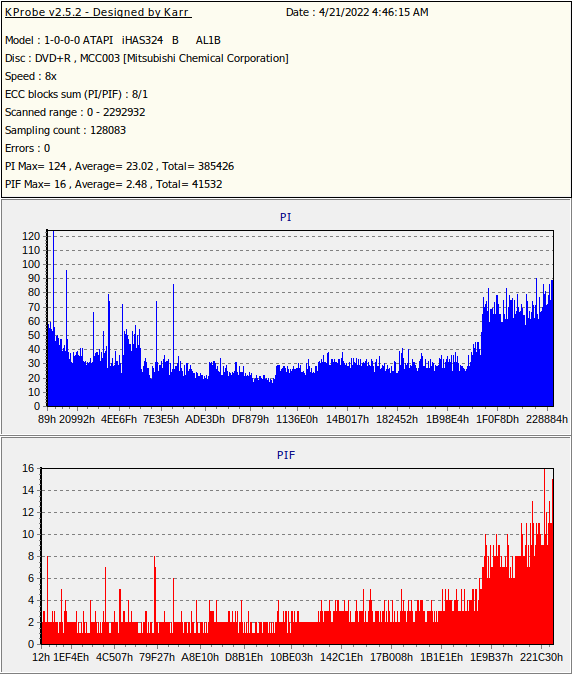 Are the newer batches more worse?

The results look worse, but the media I tried probably came from the same batch. 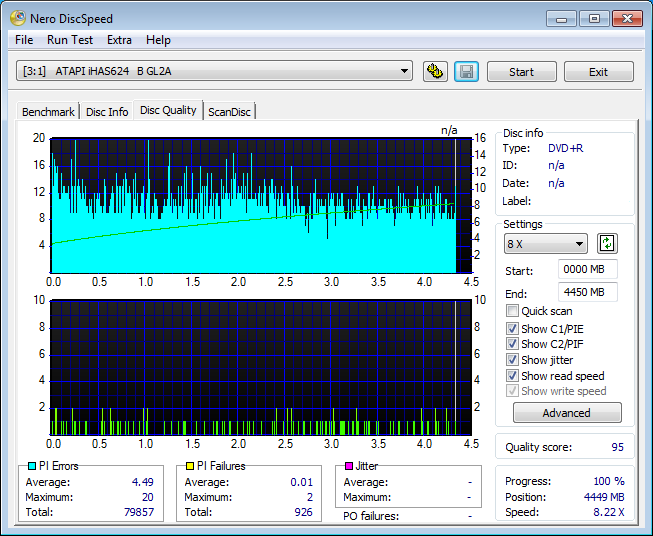 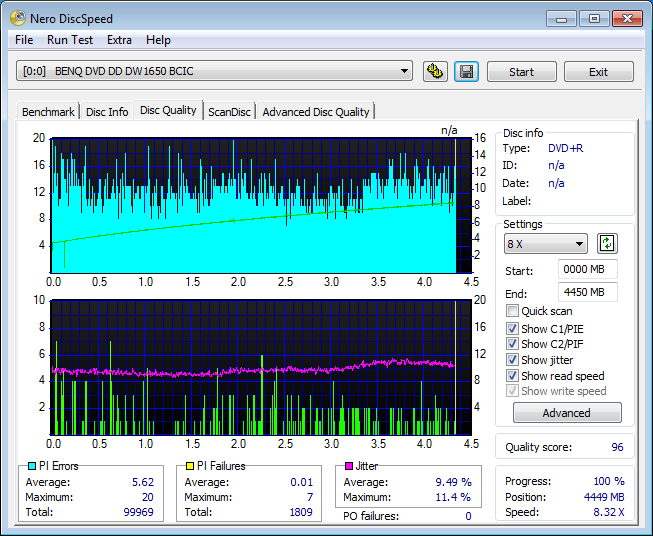 What month of 2019 were these media made?