This new firmware is posted at dhc014’s web site . I had a chance to do some testing with it, the results are mixed. It appears to offer slightly lower error rates on CDR media, but considerably higher error rates on US RW media. Here’s a few scans: 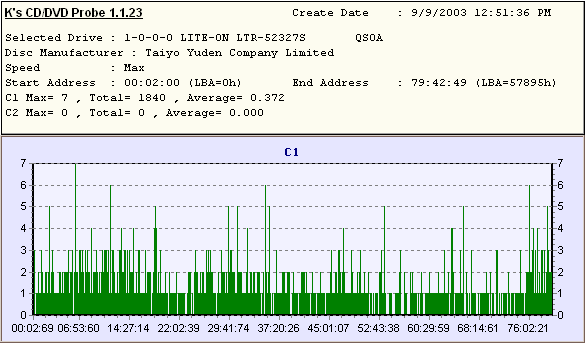 This is slightly lower than Qs09. To confirm that it was improved burning and not improved reading, I also scanned the disc with QS09, and the results were similar with slightly lower errors than a disc burned with QS09 and read with QS09. In general the total error count is about 50% lower with QS0A, as is the average count.

RiTEK TG (Fuji 48x) burned at 48x: (The 7S drive still will not burn RiTEK faster than 48x with SmartBurn on);

The difference is similar with the RiTEK media, though slightly less pronounced than with TY. 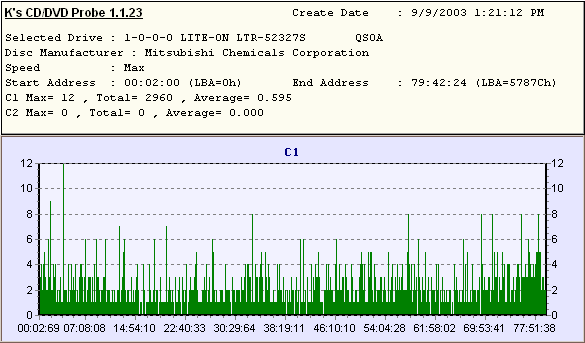 Also slightly better than with QS09.

Now for the bad news, RW quality has suffered. Here’s Mitsubishi US 650, burned at 24x:

Here’s the same disc, full-erased and burned with QS09:

So, QS0A is a mixed bag. It seems to confirm my suspicion that high-quality CDR burning and high-quality RW burning may be mutually exclusive on a given drive. We’ll have to wait and see what happens with the new 32x RW media, perhaps it will do better with the newer firmware.

Thanks for posting these tests, Rdgrimes! It’s interesting to see how the new firmware affects the burn quality.

Could you scan a USRW disc that was burned with QS09 when the drive has firmware QS0A, or vice versa? I just want to make sure that the firmware didn’t change something about the drive’s error correction.

From what I can see, QS0A appears to be reading ever so slightly better on CDR’s, but the differences could be attributed to normal variation between scans.
Here’s a US disc burned at 24x with QS09:

C1 is slightly higher, though I’m not sure it’s enough to be significant. Each firmware prefers to read it’s own burning when compared to another. I scanned a second time with QS0A and the result was very similar.

Edit: Just for fun I reversed the test,; burned with QS0A and read with both QS0A and QS09. QS09 scanned a slightly lower max and average C1.

Man it is really bad on CD-RW isnt it

A 24x Verbatim CD-RW burnt with the new firmware

Then the same disc burnt after i reflashed to QS09

Wow, that is bad!

I Have Piles
Is that a “fresh” RW disc that has been full erased? That’s worse than I’ve seen with this drive.

It was a brand new out of the packet then i did a full erase on it and then burnt it using create data cd with cd speed.

I will repeat the test as those errors are just too high.

I have re done it and the new firmware is very bad but better this time around. The top image is the new firmware and the bottom one is the same disc erased and reburnt once i had flashed back to QS09.

Maybe it is a bad disc or just the way my drive works with the new firmware but QS09 certainly works better with it.

There’s no question that QS0A is bad for US RW, I haven’t tried it on HS RW yet. Fortunately, I also have a 52246S, so I can use that for RW and the 7S for CDR’s. I think that QS0A shows slight improvements on CDR’s.

i never even thought about trying it on HS discs mate.

With CDR is was slightly better with Medianca branded prodiscs and ever so slightly worse with Inifinity branded SKC discs for me.

Just for grins, I thought I’d try some of the now infamous Memorex US 24x media (Infodisc). Here’s one burned at 24x with QS0A:

I’d have to say that QS0A is an improvement on this particular media.
Here’s a Maxell RW 10x burned at 10x:

Neither of these is signifantly improved over QS09, but are certainly no worse. The TDK is noticably better, about 25% fewer C1 total and average counts.

I tried burning a Philips 12x CD-RW disc at 12x with the QS09 firmware, and the results were terrible (hundreds of C2 errors). However, the burning quality seems far better with QS0A (see picture below). I scanned the disc at 40x in my LTR-48125W.

Now that I figured out how to attach images, here are some more pictures.

This picture is another of the same discs burned at 52x on the same 52327S with firmware QS0A. The quality appears to be slightly lower, and Smart-Burn limited the burn speed at the very end of the disc (which didn’t happen on QS09).

Your 2 scans of the Ritek are not really different enough to be significant. You can see that much variation between 2 scans of the same disc on most drives. I see much the same thing on Ritek, only TY and Mitsubishi seem to have improved much. I know I’ve never seen scans like these on discs burned at 52x and scanned at full speed on my 6S drive.

I think it’s interesting how differently the RW discs behave with different firmwares. The burn strategy must be really delicate on RW discs.

You’re right, the quality may just be due to a variation in the discs. Yes, the CD-RW discs seem to be very greatly affected by the writing strategy. In spite of what I thought before, I think that I will probably continue using QS0A because of the tremendous difference it made when recording those CD-RWs.

QS0A is a resounding success as far as I’m concerned. I had a spindle of shitty Lead Data discs that I wasn’t using because the last 3-5 minutes were full of red in CD Quality checks (and C2 errors up the wazoo in KProbe), and now their C1 levels are quite low, with no C2 errors at all.

I’ve confirmed that it’s actually a better burn; my trusty LTD-163 can read QS0A burns perfectly, whereas QS09s were full of red at the end and I’d have to abort the scan because it was so slow.

Look at this, you can hardly tell that these are bottom-of-the-bin blanks:

(sorry for the “Unknown Manufacturer”, KProbe says that for all burns – how do I fix that?)

Whether these Lead Datas last more than a couple of months is anyone’s guess, but at least I can use them to transport files to friends’ places now. With QS09, the spindle was entirely useless to me.