A few months ago, my Fujtisu P772 laptop received a Fujtisu update through Windows update that gives a warning that my battery is considered deteriorated and I must update the firmware to prevent a potential battery-related thermal incident. It let me postpone it a few times, but there was no way to eliminate the warning and if I tried to remove the software, it would automatically come through Windows Update again.

In the end, I let it go through the firmware update and haven’t thought anything about it until I decided to do a fresh Windows installation with the 1903 release. As soon as Windows finished installing and reached the desktop, that battery warning presented itself:

It’s bad enough as it is that as laptop batteries age, they lose capacity and Fujtisu has taken this a step further by reducing the maximum charge level to 65%.

So far I’m not aware of any other laptop manufacturer doing this and don’t recall reading any advice on not to fully recharge old lithium ion batteries. I can just imagine the outrage electric car makers would cause if they decide to apply software updates to customer cars so that batteries older than a few years can no longer recharge above 65%.

This appears to be an overkill response to a battery recall stemming from presence of foreign particles in some battery lots, which I presume may cause ignition under high charge states due to the initiation of internal shorts.

It seems that, in their paranoia over non-recalled batteries that might unexpectedly have the same defect, Fujitsu is applying this over-the-top fix to all laptops of that vintage.

For curiosity, I checked the battery serial # with their battery check utility. While it stated mine is not recalled, it told me I must replace my battery anyway and that I could only recharge it 6 more times!

Instead of clicking either button, I rebooted and it just displays the message in my first post again.

The laptop is otherwise in good working condition and was fairly high end when I bought and configured it (12" display, Core i5 3320M, Crucial M4 512GB SSD, 12GB RAM) It was one of the last 12" models at the time that included a CD bay as it let me swap between it and a second internal HDD.

From various experimenting, I managed to find a loophole that gets the battery temporarily charged to 100%. So if it does decide to only recharge 6 more times, I’ll try this trick.

It does make me wonder whether this will be an issue if I decide to buy an aftermarket battery. When it comes to the point where I decide to replace my laptop, the new one will not be a Fujitsu!

What are the terms of the Battery Pack Exchange Program referred to by the tool?

When I ran it again today, it gave me a close button instead of that warning that it was going to prevent me charging after 6 days. I don’t recall there being any link under that pop-up yesterday when I moved it before rebooting. This is the message it displayed when I ran it today:

This is the page I downloaded the tool from.

I would remove this “malware” tool by any means neccessary, disable auto windows updates using windows update mini tool,
and as you would clean the system from other unwanted software, hopefully it will let you charge to 100% using windows built in monitoring itself.

It looks like I have managed to defeat this and my battery now fully recharges to 100% booted in Windows.

It does not appear to be a hard firmware update, although it does persist even when powered off or booting into another OS such as Linux that does not run the Fujitsu software.

To check whether removing the software would work, I shutdown and powered off the laptop, then booted into live MX Linux from a bootable USB stick. The charge level was still stuck at 65%. I then ran it on battery until it dropped to 60%, but it didn’t seem to charge when plugged in. So I got a power plug meter (Kill-a-watt equivalent) and it showed as only drawing 18W, i.e. too low to be charging. I then ran it on battery in 5% stages and it wasn’t until it fell below 50% that it would start charging again, i.e. power meter showed 68W. Once it reached 65% Linux displayed a pop-up to say the battery has stopped charging and indeed the power meter fell back to 18W.

This was the battery status at the time and it was plugged in despite showing ‘discharging’: 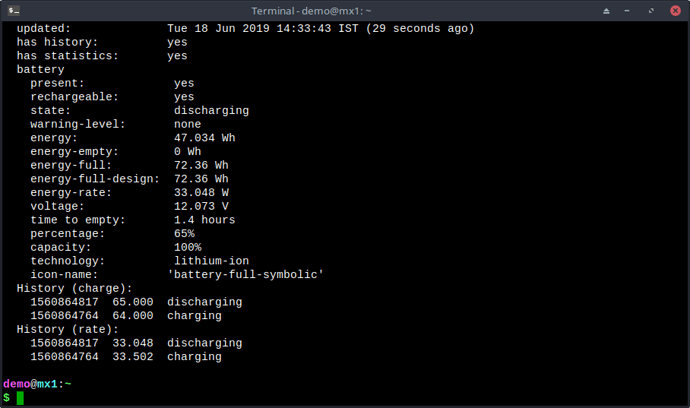 Anyway, I tried the trick earlier that let me temporarily charge to 100% (see below) and when I booted back into Linux, I saw the battery status was at 72% and charging. However, when I booted back into Windows, the charging stopped the moment that Fujitsu Battery Charging Control Utility popped up. So this gave me an idea - Let’s try disabling it instead of uninstalling it. Sure enough, once I used the trick to get the battery charging again, it continued charging even when booted into Windows.

Here’s the steps for anyone affected (who’s battery is not recalled) and would like to charge their battery back to 100% again:

Finally, to double-check that it was charging past 65%, I booted back into Linux to check the voltage. When it stopped at 65%, the battery voltage was around 12V, i.e. 4.0V per cell. A fully charged Lithium Ion cell is typically 4.2V/cell.

Try running Nir Sofer’s (NirSoft) BatteryInfoView to see what it says about the % of rated capacity that the battery is reporting.

I ran it just before I plugged in and its percentage gave the same as what Windows reports, i.e. 90% here. Although it doesn’t show estimated times, Windows 10 itself said 90%, 9 Hours 30 minutes left, which no doubt is a rough estimate.

I plugged it in and left it to fully recharge and this is what the BatteryInfoView utility showed: 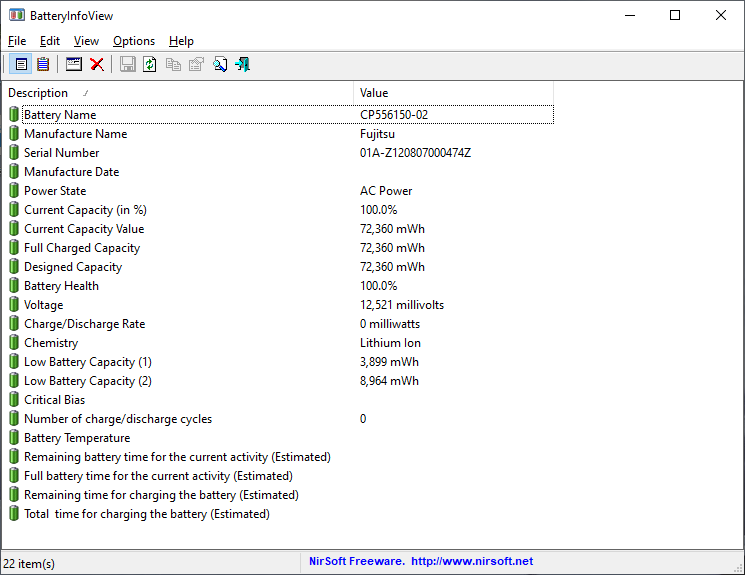 Interesting. It is reading 100% of designed capacity; i.e. the battery has not lost any capacity due to aging. This is probably not entirely accurate, and it’s possible the factory capacity spec is conservative.

BTW, the “capacity” in GNU/Linux shows the amount of power your battery is still capable of holding. So, when it says “100%” capacity, it means the battery still has the same charging capacity it had when it left the factory. Since I also have reservations about the accuracy of such a claim, I would consider letting the battery reach around ~8% before recharging it. That should recalibrate it, allowing you to see what the REAL capacity is.

Anyway, I’m mostly pointing out that what the Nirsoft utility says is exactly what the GNU/Linux command says. Thus this is not a bug with Windows or the Nirsoft program.

(Just out of curiosity, were those screenshots made with the upower -d command?)

They were run directly on the battery, i.e. “/org/freedesktop/UPower/devices/battery_CMB1” above.

This is what it gives for “upower -d”:

The battery regularly gets fully discharged (to where Windows hibernates), mainly due to an annoying quirk where the laptop shows a yellow LED for when the battery is below 50% and a yellow LED to indicate it’s charging. This caught me out a few days ago when a neighbour asked for help troubleshooting his 4G router. I plugged my laptop in and the yellow LED lit and unplugged the router to do some adjustments to the outdoor antenna using another item to show the signal levels. When I plugged the router back in, it wouldn’t light. I tried another socket, etc. and figured its power supply died. I drove home, brought with two power supplies and to my surprise, neither would work. It turned out their kettle tripped the RCD, knocking out the sockets and I had mistaken the yellow LED on the laptop as it still charging, which discretely changed to indicating the battery was under 50% when the mains power tripped.

So far since disabling that Fujitsu battery control utility with Autoruns, I have not run into any further issue with fully recharging the battery. The battery still has a very good runtime, although hard to say if it lasts as long as when it was new. I remember at the time (February 2013), I was debating between this and a similar HP laptop (with a better IPS screen and no DVD bay), but chose this one as it had a much higher battery capacity and a DVD drive bay. SSDs back then were obviously a lot more expensive, so this let me buy a reasonably priced SSD for the OS and a 1TB HDD to fit in a DVD drive bay HDD enclosure.

The runtime could be extended further with an optional battery that fits in the DVD drive bay, however I never bought that option. Back then, many laptops were being supplied with around half the Wh capacity of this one and I really wanted something that lasted longer than the typical 2-3 hours at the time.

thank you so so much. you are the best

it seems to be absurb