Originally posted by BoSkin
[B]
Yes. Just updated it.

And some results, pls?

And some results, pls?

This time, this terrible windows flasher did reboot after the update!

And some results, pls?
Regarding what ? What exactly results do you expect to see ?

Originally posted by BoSkin
Regarding what ? What exactly results do you expect to see ?

Increasing writting quality for UHS RW, for example…
I’d hardly ever rewrite, so that’s no concern of mine.

Besides, I haven’t seen 24x RW media here yet.

These media have existed since several months, so your country seems to be a bit behind…I received my first ultraspeed cd-rw a few days before firmware 6S07 had been released

Originally posted by alexnoe
so your country seems to be a bit behind…
Right. But I swear God, that’s not my fault

It’s hard to imagine that it could get much better than it is now on the Verbatim UHS media, but there have been some improvements with each firmware in this regard. I’ll post a test in a few minutes.

It could, however, be worse: 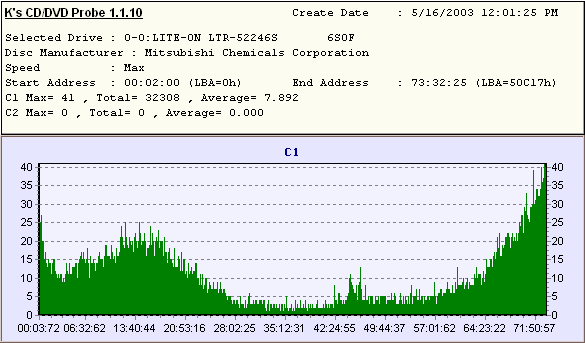 I may be flashing back to 6S0D, as it had slightly better RW performance on this media than the 6S02.

Here’s a prior scan on the same media with 6S0D:

BoSkin
Right. But I swear God, that’s not my fault

Been doing a few test burns on CDR’s with 6S0F. It appears to be doing about the same on TY media and slightly better on Ritek TG at 48x. Still producing unreadable sectors at 52x on any media on this drive.
Can anybody else confirm the loss of quality on the 24x RW media?

My Datawrite black CD-R are now set as 16x instead of 32x by SmartBurn on my 52246S with 0F firmware. The overburning capacity also went down! :a