Hey Guys, Ive had a look at other threads but a lot of it now seems to be a little old. Basically Im thinking about buying a Bluray Burner To Back Up files from my NAS. Now ive only done an hour or so of research but believe that BDXL is still expensive so think that BDR DL is likely my best cost versus storage capacity option. Please correct me if I’m wrong. Cost is a Major concern for me as im not currently working. However I think I could stretch to about Â£50 or so for my Drive ! Im thinking OEM !and then down the road source some reliable but reasonably priced media and burning software. Like i say Im still kinda new but believe that Win XP cant handle Bluray without specialist software ? Is there a newbie guide to what i will need ? A detailed guide would be handy for newbs like me !

You will need burnsoftware anyway, get Imgburn.

Thanks for the heads up on software chef. Now what you think of what burner to buy ?

What software are you talking about? ImgBurn will be fine for burning duties. Do you need playback software as well?

DL Blu-ray media is expensive, and there are only a few reliable brands. Panasonic is one, and I’ve read that they are also providing DL Blu-ray discs for JVC/Taiyo Yuden. 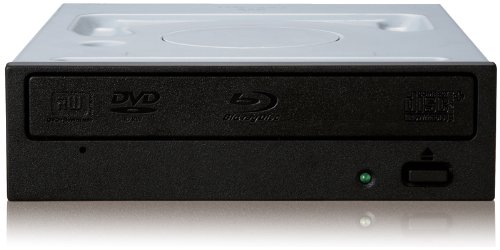 Looking for the fastest drive in the market but already have software? Then the BDR-208DBK is the drive for you. The BDR-208DBK drive is perfect for system builders, for those looking to upgrade to a ...

If it is whats the benefit of this over the 209/2209 ? Ive not a great deal of study as yet on bluray and lack time so your expert advice is appreciated.

My expert advice is less than expert I’m afraid, at least if you are talking about hands on experience with the 208. I’m just going by comments from a very knowledgeable member here in the forums who had both, and felt the 208 was slightly better. But you would have to research that, and perhaps later firmware has gotten the 209 up to the same level. The long thread on the 209 shows it to be a pretty good drive, so I don’t think you’d be disappointed in it.

My Pioneer is a 207MBK, and has been fine for Blu-ray burns.

Thanks Kerry56. One last question ! Where can i get Imgburn from ? Who makes it or is it easy to find on google ?

Be careful of the installer, and don’t let it add any extras, but really the program is worth dealing with that, as it is the most versatile burning program around, and is free to use.

If you need guides on using it, there are plenty here: http://forum.imgburn.com/index.php?/forum/4-guides/

Great Kerry, I was going to torrent it but hey its free anyway so no worries there. Just need to scrape some cash together for the burner and some blank media and I’m good to go.

If only everything in life was free eh

In europe you can get the 208D (without XL support) and the S08XLT aswell as the 208EBK, they both have BD-R/E XL support.

If the Panasonic media is the best DL media around can you specify what exactly im looking for ! There seems to be lots of different specifications of media and im not just referring to the types eg SL , DL etc. So that’s a few more questions for you guys that are in the know. Hope you can help and thanks for your time .

Also DL media has 50 Gb storage and XL is 100 Gb ? Please confirm this please. I also read you can over-burn and get 120Gb on a XL disc ? Or is that quad layered versus triple layer XL media ? I want the largest storage i can as my NAS has a lot of files id like to back up or move to a separate location so i can free up some space on her ! BUT i don’t want to spend Â£35 a disk for media If the Panasonic media is the best DL media around can you specify what exactly im looking for ! There seems to be lots of different specifications of media and im not just referring to the types eg SL , DL etc. So that’s a few more questions for you guys that are in the know. Hope you can help and thanks for your time .

OK EDIT TIME. Ive been looking and I can only find XL media for Â£30 - Â£40 per disk !!! I can get a USB HD for that sort of money ! Totally ridiculous cost. Is there any chance that’s going to change soon ? The reason I ask is that the EBK which supports XL media is only about Â£3 more expensive if somewhat slower. only x4-x8 on XL media but I’ve no info on how fast it burns DL media

For Â£3 id like to future proof myself for when XL media is mainstream but only if this is likely to be the case and im not sacrificing an undue amount of performance while burning DL media. Again your advice and opinions are very welcome.

XL media is a niche product, and not likely to become more popular. Because of this it will always be expensive. I’m not sure that there are any tests of this type of media in our forums. There might be one or two hidden away in some of the drive test threads.

Very few of us advocate using multi-layered optical discs for archival storage, so I don’t think it a great idea to use XL media anyway. I don’t even use DL media anymore, for DVD or Blu-ray.

Hi Kerry . Its more for backup at the moment that I’m concerned with. 100Gb is attractive when you have Terabytes to archive. However the cost is prohibitive. Id much appreciate it if you would expand upon why you don’t use DL layers ? Ive never burnt Blurays ! so don’t know of any pitfalls ! I’m guessing but is it read speeds impair video playback or is it more degradation of the media over time making blue ray archive unreliable ?

The DL discs are more complicated in structure. There is just a lot more that can go wrong with them, both in burning and in deterioration. The triple layer XL’s are just adding gasoline to the bonfire.

I have a fair number of DL DVD discs I burned back, oh six to eight years ago, that are still fine. All of them are Verbatim MKM-001 discs, and I burned most of them at 4x on a variety of drives. The last two cakeboxes I got of these same discs, I started noticing deterioration of data and poor playback [B]very[/B] quickly. So I switched from DL DVD’s to single layer Blu-ray for larger data storage on optical discs, and I make copies that I keep on hard drives also.

Other people around here with just as much experience as me have stuck with the Verbatim DL DVD’s and don’t seem to be having that many issues, but I just didn’t want the hassle of checking them. I also have the sneaking suspicion that modern DL DVD’s are not getting the same quality inspections in the factory that they might have had when DVD’s were more popular and more profitable.

But I also noticed deterioration of discs when using Ritek made Blu-ray (single layer). The Ritek BR002 discs have become notorious in our forums for their unreliability. All the data was lost on them in the space of three years for one brand, and in four years for the second (Memorex and Ridata).

Through a lot of reading around here, and personal experience, I’ve come to the conclusion that there are three well established brands/types of Blu-ray single layer discs that are fairly good. They are Panasonic, FTI/Falcon and Verbatim (HTL only). Melody discs with the INFOME-R30 and INFOME-R40 id codes are also well thought of, though I’d like to see more data over time, so I have avoided these so far.

The only DL Blu-ray with a good rep seem to be the Panasonic discs. And they are prohibitively expensive for my taste.

Sorry for the late reply.

Of course I prefer a product which is BD XL capable. I’ve been using BD-R XL since many many months now and they of course become cheaper as most things over time.
I also backup stuff to DVD-RA and HD-DVD-R these days even they sound obsolete to many people. Not for me.

If you don’t care about BD XL, choose the drive you can get the fastest way.