Black Friday TO much

I went to Walmart at 5 to get the 60inch tv that goes on sale a 6pm. The parking lots was almost full. The store was so full by 6pm that after getting my card to pick up the TV in the back I could not get to the checkouts to pay for it. All these people with shopping carts getting one item the could have carried. My daughter said when I got home that the fire trucks were sent to the Walmart a 4 year old had got stomped on during the rush. It was bad last year but this year it was so full that if someone had farted they would have knocked 10 people down. I do not know why someone would even bring a 4 year old to Walmart for Black Friday but still I cannot see how the fire department lets a store get so full that you cannot get down the aisles.

I’ve heard the horror stories about Black Friday over there! With Black Friday just taking off over this side of the pond, I hope there are no casualties

4 deaths and 67 injuries the last years.

Online shopping is a wonderful thing.

My complaint about Walmart last night was right at 6:00 PM when the first sale started two store employees were moving two full pallets of some large item down one of the main isles . This was an isle where a long line of the plastic wrapped “boxes” with clothes & other items that were on the Black Friday add were.
Obviously this isle was packed with customers.
Why choose right then to do this ?
The employees were in everyone’s way.
I made the mistake of stepping back & I was on the opposite side of the isle to where I wanted to be. The employee was stopped & told me to wait instead of stepping across the handle of the pallet moose. Needless to say I went ahead. This same employee then bumped the woman that was squated down beside where I was. She was just one person closer & getting an item off the bottom shelf.
So my thought was get it together Walmart.
Get the merchandise like this where you want it before the sale starts.

Black Friday Just Got Real As Fights Kick Off In Asda

Black Friday - yeah, that went well! Shoppers ended up with a bit more than they bargained for after an apparent punch up over cheaper television prices. A shopper was restrained after an argument at...

^ The first Asda mentioned in that article is the other side of Bristol from me, no stampedes in our nearest one though I don’t think.

But hey, at least we get to join in the Black Friday fun now!

One arrest, and one lady taken to hospital here I think - so it could have been worse!

This happened about a few mile from where I live

A 29-year-old shopper was pepper sprayed and arrested Thursday in a New Jersey Walmart after arguing with a store manager about a TV and attacking an officer, police said.

All the frenzy surrounding this reached the news here in the UK too.

Here’s the BBC’s take on things. 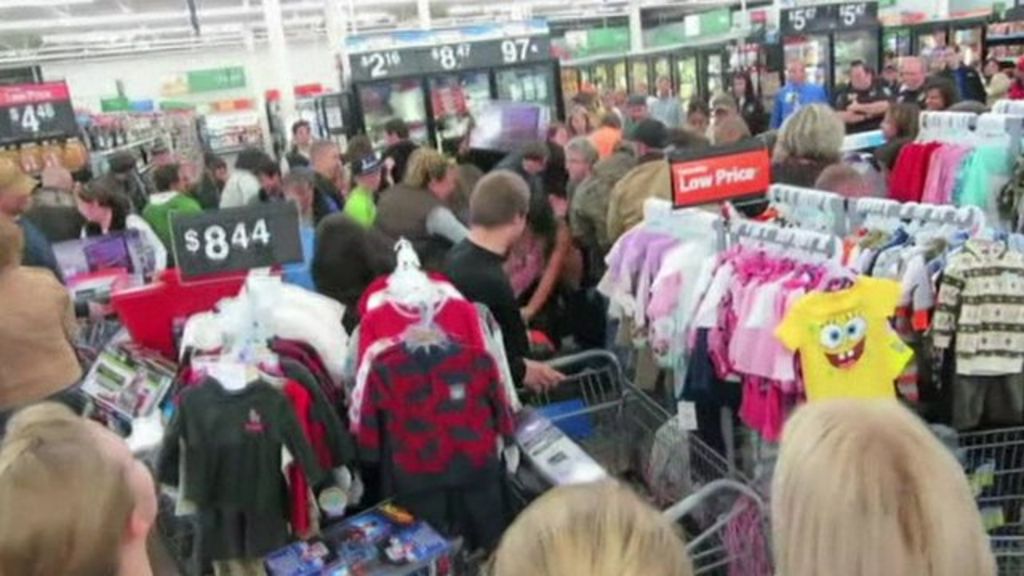 Shootings, stabbing, robbery and brawls taint the Black Friday shopping frenzy, as bargain-hunters mob malls across the US.

Our kids received a new biiiig history book (a high-school level text) and we were looking at photos of men in soup-lines. Several thousand, stacked several thick, but all standing in the queue. The photog captures sad eyes among most of them. Occasionally a blank stare, past forlorn. There 's a defiant half-grin in there, too.

Hungry men, ashamed men. But not fighting over a bleepin’ TV set. Twentieth Century versus this one. Good grief. Have the Consumer Gods won? Because I’ve heard of fights over super-popular dolls and trinkets, too.

I can’t believe people still fall for the hype and put themselves through so much greed-based stress and injury, expecially since it’s for nothing more than the pagan-Catholic blasphemy of Christ-Mass (“Christmas”). It’s all a huge joke and nothing but shame before God and eternal damnation will result when this humanity faces God (or did Jesus lie when he warned that all but a few would burn?).

Christmass does far more harm than good, especially since it insures that billions will face Jesus as blasphemers. The only ones who get any real good from Christmass is (corrupt) corporate America (and the [corrupt] Catholic church). It’s all a big, anti-Scriptural joke and a lie, and real Christians have no business messing with it:

“Thus saith the LORD, Learn not the way of the heathen, and be not dismayed at the signs of heaven; for the heathen are dismayed at them. For the customs of the people are vain: for one cutteth a tree out of the forest, the work of the hands of the workman, with the axe. They deck it with silver and with gold; they fasten it with nails and with hammers, that it move not”. Jeremiah 10:2

[QUOTE=ChristineBCW;2711387]Our kids received a new biiiig history book (a high-school level text) and we were looking at photos of men in soup-lines. Several thousand, stacked several thick, but all standing in the queue. The photog captures sad eyes among most of them. Occasionally a blank stare, past forlorn. There 's a defiant half-grin in there, too.

Hungry men, ashamed men. But not fighting over a bleepin’ TV set. Twentieth Century versus this one. Good grief. Have the Consumer Gods won? Because I’ve heard of fights over super-popular dolls and trinkets, too.[/QUOTE]

All this greed and stupid prestige projects, like the proposed HS2 railway in the UK that’s cost millions already and it’s not even been agreed yet, while people are having to use food banks or starve. It’s hard to believe the UK isn’t now a third world country.
Pakistan is spending huge amounts on purely prestige projects, so is china. What about the people? I guess they don’t matter as life is cheap, where money and possessions are the ignorant uncaring wealthy powerful minorities God now. Obviously.
The whole lot makes me want to puke and I sometime feel ashamed to be a part of the human race.

Black Friday, what a load of crap. I’ve now received 57 emails from companies offering me BF deals. A whole 5% discount, BF? Yeah it stands for Bloody Fools. I’d better stop ranting or this could end up as the longest post ever. :a

I didn’t buy much at Walmart Black Friday & It was the only store I went to.
They had a good deal on Wrangler jeans . They were aproxamately 30% off.

@ Gaarry , I’m not going to get into the Christmas association with pagan customs to a large degree but I feel I need to post something in response.
I think a lot of us Christians know about this & like myself forgo some of these customs. I will put it to you like this though .
I haven’t ever found one Christian that brought a tree into their house to worshoip the tree or the pagan gods that might be associated with it. That goes for other Christmas customs that have pagan origins.
The majority of Christians if not all do this as a rememberance of Jesus & to worship God. I use Christain & include both Protestants & Catholics in that group.
I think you would be hard pressed to find a Christian that celebrates Christmas to worship pagan gods or idols.
Even within Christianity I don’t know any that worship Joseph or Mary.
I know the Catholics are close to Mary worship & I haven’t checked that closely since I’m not nor do I intend to become a Catholic. I will have to let one of them asnwer that.
That’s probably enough . Posts that have much about religion tend to be removed or the thread gets closed.

We ,meaning the wife and I( she dragged me with her)we stopped at three or four stores and the one store that amazed me was Menards.The place was packed,they had a guy directing people to which check out to get into.I’ll tell you what that’s one day to avoid.I’m glaad where wasn’t a full moon.

o to anybody that doesn’t know what Menards is,it’s a big box lumber/everything store much like home depot and Lowes

Maybe you don’t understand. Going on the blind assumption that anyone and everyone who calls themselves “Christian” and is actually born again as Jesus requires is a mistake. Many, if not most are not. Fully, easily, 98% of those who assume Christianity are nowhere near being born again. If someone is not born again, they simply are not a true Christian; they are merely “religious” (or did Jesus lie?). There are no if’s, and’s or buts about it; no extrenuating circumstances nor contingencies. It’s pretty cut and dried; black and white.

Jesus warned about it time and time again, how many would call him “Lord”, but he would reject most of them. The “God looks on the intentions of the heart…” is a lie and self-deception; he does not. In the mesntime, today’s so-called “Christians” continue to manifest profound ignorance of His word and warnings (yet they so eagerly “learn the ways of the heathen”).

In the beginning, God created but one religion. Actually, it was more of a relationship. Satan hated that so he inspired countless other false religions (to muddy the water). One of his more sucessful religions was Catholicism. All have one thing in common: they prevent a person from getting born again.

Most “Christians” don’t have the first clue of this: Salvation is three-fold. God is a spirit being, he lives in a body and has a soul. When a person accepts Jesus as Lord of their life, their spirit is born-again; their soul is being born-again daily and their body will be born-again at the resurrection or Harpazo (“rapture”).

This all is (should be) basic Christian knowledge, but it isn’t, because most who claim to know and love Jesus don’t really love him enough to read His word.

No amount of “Oh, they mean well” will remove that crime from their book of deeds, if their names are not written in the Lamb’s Book of Life. Catholicism insures that.

This is why I fully reject Christmass and all it’s trappings.