I worry about OLED screens, it seems they have a limited lifespan. I’ve been using a small mp3 player and I’ve bought 8 0f them over the last 6 years or so. All of them have fading screen problems, the oldest ones still work, but have almost no display at all and it’s a very dark purple colour. the newer ones are going dim. There is only a contrast control in them and this seems to be adjusted to max as default. If it’s turned down, the screen gets dimmer. (I buy these because I have a superb dock for them that sounds very good and wasn’t cheap.)

I can imagine a 60" TV dying after 6 years? I guess and hope if OLED does take off they last longer than these mp3 screens.

Voxy, I’ve heard the same “limited lifespan” concerns about Plasma’s, too, but also about LEDs. Darn - does EVERYTHING have a finite lifespan except a plastic shopping bag?

(We’ve been under that ‘ban’ here in our city for a year now. Fine. But what about all the extruded plastics, and styrofoams? If they REALLY wanted to pretend to offer a better environment, take a look at the extruded plastics packaging industry. And TRY to shut that down. I’ll bet substantial payoffs and kickbacks would flow to those elected officials-! Er, I mean, “rebates” and “campaign contributions”. Jobs for their kids, uncles and aunts, etc…)

They still have plastic shopping bags here.
I always save them & find a second use.
Main ones are small trash can liner & used cat litter bag.
What I think we need are plastic recycling containers ( where a person can take some plastic containers).
We had some here for a while but I guess not enough people were using them.
Also I find very for products made from recycled plastic.
Last one I remember was a recycled plastic pet food bowl.

I haven use anything with an OLED

Christine, my old 42" plasma is still going after nine years, it’s been in a garage/service station reception for four of those and it’s on 24/7 and I gave it a good hiding as well. Unfortunately the company that made it only do commercial plasmas now and they are on my S*#& list. My wife’s Samsung LCD is an early one at 8 years old and still has a great picture. My mp3 players are OLED and most of them are knackered after a relatively short time.

The shopping bag thing is a real problem here as well. At least we can recycle them back at the supermarkets recyc box.
The packaging on food is horrendous, the standard statement when I moan about it is, “[I]well it keeps people in jobs[/I]”. What a load of cr…, err packaging.

We collected the shopping bags for our own uses for years before the “year long pre-notice of ban” occurred, and then we were faithful in keeping them. Hubby keeps one or two in his saddle-bag and cargo shorts because he doesn’t like carrying the cloth “pursey bags” that I’ve made out of scraps.

Of course, he doesn’t like to wear a lot of things I get him into. “That string is riding up my…” well, never mind. Complain, complain, complain. It’s not like I made him wear the Gloria Graham outfit to EVERY party that year… sheesh…

“This old thing? I only wear it when I don’t care how I look!”

It’s very annoying how those strings ride up your … Now if they were made of OLEDs perhaps it would only be for a short time. (OLED haute couture)

Oh, he’d do nothing but complain about lighted-ones, I’ll bet. “Now everyone can SEE-! Why don’t I just wear nothing-!” The man has no sense of humor, especially when it comes to MY fun at HIS expense. Besides, I often never let him get out of the house - even beyond closed doors! - in some of those outfits. MEOW!

But how does this slogan strike you? [I]“My men wear OLEDs, or they wear nothing at all”?

I’ll bet that the mp3 player OLED screens which are made to be CHEAP will continue to fail as do OLED screens used on some models of smart phone.

There are “new technology” PLASMA screen TVs that are supposed to have a 10+ year lifespan, personally I recently bought two 40" class televisions and though I could have saved about $125-$150 on EACH of them to go with a Samsung plasma screen I don’t entirely trust that technology.

OLED? I am not now nor have I ever been an “early adopter”

It’s true that OLED has so far been far less successful than LCD, but AUO may not be the right authority to state that OLED cannot become mainstream since it never led the development and marketing of OLED. Samsung has a virtual monopoly of the world’s OLED display market. Samsung makes the materials, the panels, and the phones and televisions with OLED display.

Sony works with Panasonic of Matsushita. AUO makes the panels for Sony and Panasonic.

Sony and Panasonic to Collaborate on the Joint Development of Next Generation...

Japan, June 25, 2012 - Sony Corporation and Panasonic Corporation today announced that they have signed an agreement regarding the joint development of next-generation OLED (organic light-emitting diode) panels and modules for TVs and large-sized...

Japan, June 25, 2012 â€“ Sony Corporation (â€œSonyâ€) and Panasonic Corporation (â€œPanasonicâ€) today announced that they have signed an agreement regarding the joint development of next-generation OLED (organic light-emitting diode) panels and modules for TVs and large-sized displays.

The pieces are falling into place about Panasonic and Sonyâ€™s OLED collaboration. At CES 2013, they exhibited a 56" 4K OLED TV and Taiwanese AU Optronics now confirms that they have been involved in the development of the OLED panel.

Sony, Panasonic & AUO develop OLED
Sony and Panasonic’s 56" 4K OLED TVs were very impressive - but they received a little help from outside.

We reported on the first rumors on a Sony and AUO collaboration in March 2012. The question is if the trio can keep up with LG and Samsungâ€™s OLED roll-out. Samsung and LG exhibited the first OLED-TVs exactly one year ago but have yet to launch in significant quantities. Samsung is the largest OLED manufacturer today, based on its OLED production for mobile devices.

That Samsung is the largest OLED manufacturer is an understatement. It has something like 98% or 99% of the world market share. Half of the rest is LG’s. Simply said, the only mass producer of OLED is Samsung. Since Samsung, LG, and Sony-Matsushita-AUO are launching OLED TVs, behind-the-scene wars regarding patents, business intelligence, and ensure low-cost material supply are fierce. AUO is the product of at least three Taiwanese display manufacturers from Acer, BenQ, and Quanta. When I say Samsung, it either means Samsung business group, Samsung family of business groups, or Samsung Electronics. Samsung’s key players regarding OLED are Samsung Electronics, Samsung SDI, and SMD, but Samsung recently integrated their various LCD and OLED business divisions into Samsung Display.

And here’s how AUO works with Sony and Matshishita to produce OLED panels to be shipped to HTC, one of the largest smartphone makers of Taiwan.

AU Optronics (AUO) reportedly will begin shipping 4.3-inch AMOLED panels to Sony and HTC in June. HTC will use the panels for the production of its HTC One S smartphone. AUO declined to comment on individual clients but stated that the company is ready for mass production of AMOLED panels.

However, Samsung Mobile Display (SMD) will continue to serve as the primary supplier of AMOLED panels for Sony and HTC, since SMD is ahead of AUO in terms of technology, yield rates and quality for the production of AMOLED panels, according to industry sources.

The yield rates of AMOLED panels at AUO’s 3.5G lines reportedly stand only at 20% on average currently, the sources indicated.

SMD will still be the primary supplier of AMOLED panels to both companies, and currently the quality of the SMD panels is still superior to AUO’s ones. Indeed the reports say that AUO suffers from very low yields (around 20%) in their first AMOLED 3.5-Gen line in Taiwan.

AUO plans to invest around NT$40 billion (around $1.3 billion US) in 2012, mostly on AMOLED panel development and other advanced technologies. Earlier reports suggest that AUO is collaborating with Sony while other reports say that HTC secured AUO’s entire OLED capacity. Perhaps the truth lies somewhere in the middle…

Many of Samsung’s own engineers and managers once said plasma was better for TV than LCD and that was less than 10 years ago.

Most of the differences are not really about technologies and the feasibility of commercialization, but about money and politics. Samsung has nothing to do with IPS. LG worked with Hitachi to make IPS panels. Sharp makes some of the better panels, but most OEM buyers would choose LG. Foxconn of Honhai based in Taiwan started working with Sharp. Samsung Electronics chooses AMOLED for their smartphones while Apple and LG adopt IPS.

Some more links regarding Samsung’s OLED yield rates, but these are all in Korean. AUO chairman is merely stating he hasn’t been able to find out how Samsung recently increased the yield rate for large OLED panels from less than 10% to nearly 60% in the first half of this year.

And reports on Samsung buying 50% of Novaled AG, a Dresden company making materials for OLED. Cheil Industries is actually a Samsung company. Lee Gunhee’s second daughter is its VP. Samsung Electronics buys 40% and another Samsung company already has 10%. 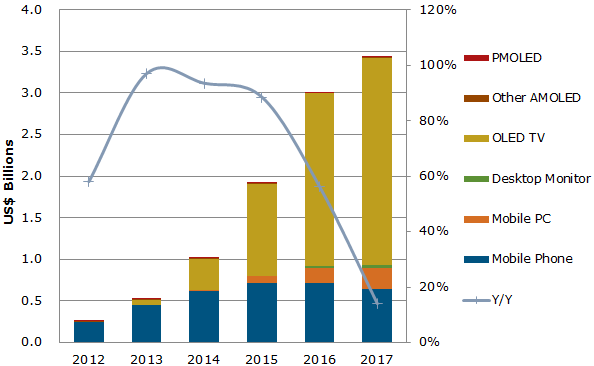 Santa Clara, CA (PRWEB) August 19, 2013 -- Growing demand from large TV panels is expected to increase OLED material revenues at a compound annual growth rate of 67% through 2017, even as material revenue from mobile phones slows after 2014.

Manufacturing cost is high and materials and patents remain big barriers and raising the yield rates takes years and billions of money. But it’s obvious it took Samsung fewer years with OLED than LCD.