It’s normally very rare for me to burn any media these days.
However, and without going into details. My four year old niece is quite ill at the moment, and can’t really go outside to play. She has been spending a lot of time looking at videos I shot of her and other things and watches them in her bedroom via an Firestick streaming from their NAS.

At 4 years old she kind of struggles a bit in operating and locating the videos via the Firestick. She is very independent and gets annoyed if she requires help. She also has a DVD player which she can operate very well.

My brother asked if I could burn a selection of the videos on to DVD for her.
I thought no problem I have loads of recordable optical media I can use left over from when burning was popular. I also have Nero Burning ROM platinum (2015).
I went to install Nero, but can’t install it on Windows 11 as it’s not compatible without disabling loads of Win11 security features.

No problem I thought. I’ll download a trial version of the latest version of Nero, and if its suitable I’ll buy it.
First problem. It’s so bloated with software I will never use, and during installation you don’t get an option to only install the stuff you want. It will install everything. It’s also quite expensive at £119.

So after trying it for a few hours I decided that Nero wasn’t for me. So set about uninstalling it. You can uninstall most of it, but not all of it, which IMO is unacceptable. So a Macrium Reflect system restore was called for. Thankfully I had made a differential backup before installing Nero.

Now I could use several tools to transcode, author, and burn a video DVD. But I thought there must be an all-in-one solution similar to what Nero can do.

After a bit of research. Many people were saying how good Ashampoo Burning Studio was.
I haven’t used Ashampoo for many years. But thought it was worth a go.

However I thought trying Burning Studio 2022 would give me a good idea of what the application was like feature wise, and what it was like to use.
The download size was only 78MB compared to Nero’s 900MB+.

To use Ashampoo Burning Studio you have to supply an email address where they can send you the free licence. I do so and promptly received my free licence.

It’s very impressive, easy to use, and very reliable. But I thought I would think it over for 24 hours, and use it a bit more before deciding if I would buy Burning Studio 23 or not which does have DVD and BD video authoring. Price was good at £44.99. But let me think about it.

The following morning there was an email from Ashampoo with the following offer. Needless to say at that price it was worth the risk, so I purchased it 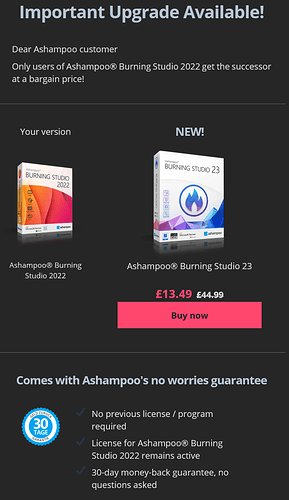 Today I have successfully authored and burned 4 DVD’s with little effort. Performance is excellent, but dependant on how powerful your CPU is, and if you have NVidia H.265–HEVC hardware acceleration on your GPU. Which I Do.

Most certainly worth checking out.

Dee, you must be very lucky.
I did the same method as you and eventually Ashampoo wanted me to pay £26.99 for it.
Mmm, it’s OK, but I think I will stick with the free one and unsubscribe from the junk emails. I did get an email this morning, it was a discount (not huge) on apps that I don’t want, or need. The 23 version is full of bloat I will never use, OK for some, but not any use to me. It was worth a try any way, thanks Dee.

Dee, you must be very lucky.
I did the same method as you and eventually Ashampoo wanted me to pay £26.99 for it.

That’s strange. I just installed the 2022 free version on a second PC.
I got the same offer as before. 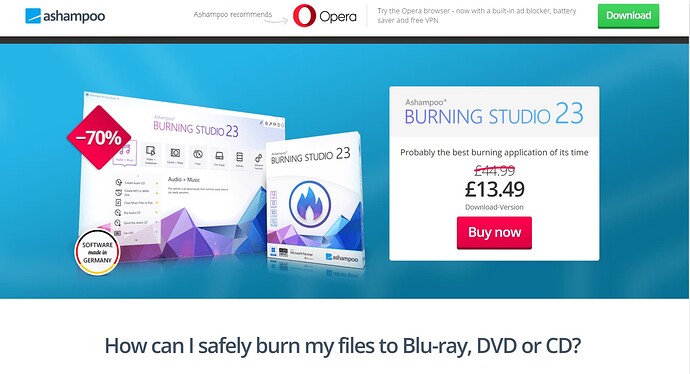 Dee, I’m going to try again on another machine and see what happens. I will let you know wha is offered.

Dee, I got this offer, I think they like you. 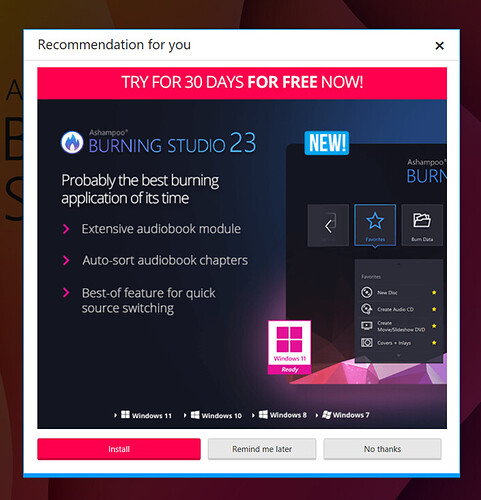 I think you get one offer per account.
I used a different email address for the 2nd PC, and stayed subscribed to the news letter, etc etc.

In the end. You still have the 2022 free version, which is very good in its own right.
I needed the DVD Video Authoring. But if you don’t need that then it shouldn’t be problem. 2022 free, is not time limited or anything like that, and it is fully functional.

I wont be buying Burning Studio 23 for the second PC anyway
.

The free version is fine either if you don’t need authoring capability or if you are comfortable using (freeware) AVStoDVD for that purpose.

I did just what you did Dee and I got the same $14.99 offer it took about 24 hours to get Thanks for all the info.

Hi Dee, I received the £14.99 email this morning. After playing with it for a few hours, I’ve decided I don’t think the authoring bit is worth having on the 23 version even at that price. (That’s a litre of petrol after all)
I will leave it in this machine as the free version and hopefully I can unsubscribe from the junk emails from them.
If not, I have other apps that are a bit old, but for copying DVDs are better. I was hoping this would be more useful, but it ain’t! Thanks for sharing this Dee, sometime a real gem appears.

The free version is fine either if you don’t need authoring capability or if you are comfortable using (freeware) AVStoDVD for that purpose.

I wanted something that I could setup easily, and would then do the whole job unattended. From transcoding the video to a finished burned Video DVD/BD.

Good to hear you got the same offer. I was beginning to think I was the only one getting that offer.

If not, I have other apps that are a bit old, but for copying DVDs are better. I was hoping this would be more useful, but it ain’t!

It does these things flawlessly in my experience.

It isn’t meant to be a protected media copier.

Sorry Dee, I hope I didn’t offend you; I already have apps that will author to DVD, or Blu-ray.
Please keep finding these gems. Dee, the Macrium reflect has been fantastic, so useful. I’m very grateful for the Macrium app you found. The copy apps I have will burn a DVD/Blu-ray from a folder, or a disc. Although not free, the Wondershare DVD creator does it all very well. The Ashampoo was worth looking at and could have been useful to me, but it’s just loading up my rig with similar apps. I’m glad it worked for you. I hope your niece gets well soon.

Sorry Dee, I hope I didn’t offend you

I didn’t take offence.
Don’t worry about it. 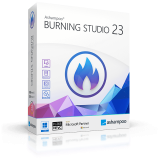 Probably the best burning application of its time

I took along 11 DVD’s including covers printed from the built in cover designer along to my niece this afternoon.
Just to see the smile on her little face receiving the DVD’s made this piece of software worth 10X the asking price.

We need more people on this earth like you Wendy.