Not a total done deal, still needs approval by the: 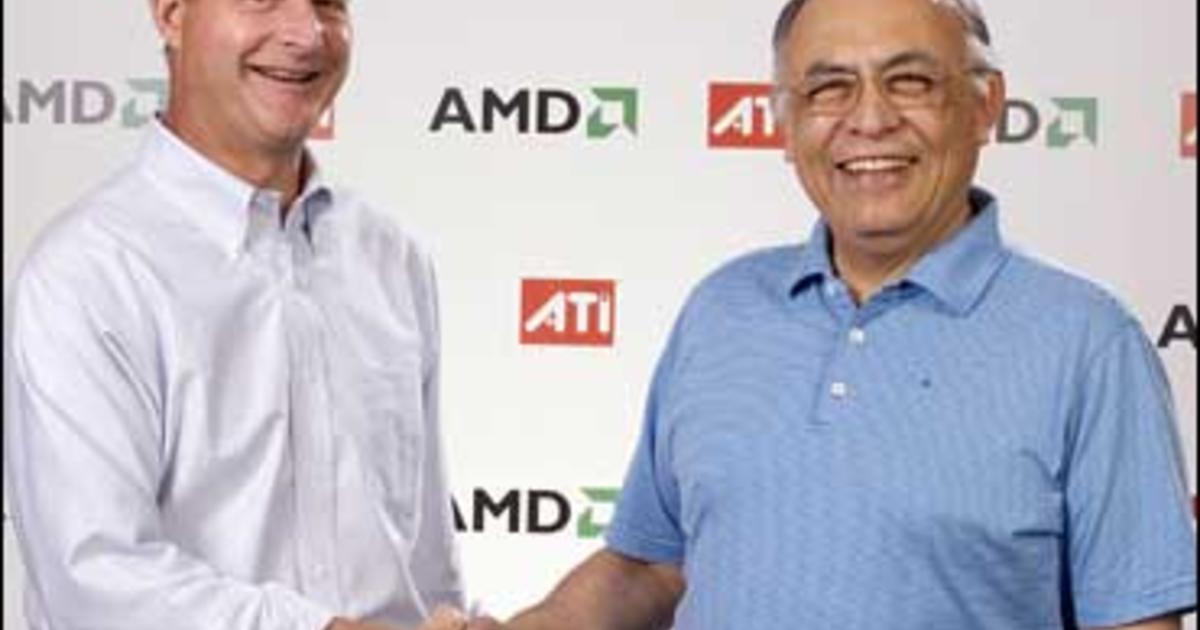 No. 2 Chipmaker Hopes Acquisition Will Help It Close Ground On Intel

I thought it was a big surprise myself, as I always had trouble with ATI cards, but once I used nVidia cards, never had another problem. I later traced it to the ATI drivers, which were very “immature” at the time. I realize there are many ATI fans out there, but I’ve never been a royal gamer, so for my money and what I see on my screen, I’ll go nVidia. BTW, as AMD was already working with nVidia, I don’t understand why they didn’t take a larger stake in nVidia, rather than go after ATI, which is well-linked to Intel in the article. Seems like this deal would be some kind of conflict of interest for ATI, so if my interpretation is right, I can’t see it going through on that basis.

It lots like a done deal. All it needs now is shareholder approval.

AMD has paid something in the region of $5.4 Billion, $4.2 Billion in cash and 57 Million AMD shares for ATi. They have had to borrow $2.5 Billion to buy them outright.

It lots like a done deal. All it needs now is shareholder approval.

AMD has paid something in the region of $5.4 Billion, $4.2 Billion in cash and 57 Million AMD shares for ATi. They have had to borrow $2.5 Billion to buy them outright.

The next one to go is Nvidia to Intel. You watch, its been in the works for awhile.

Hm. Well, will be very interesting to see what happens, if nVidia goes with Intel, and if the ATI deal goes through. I’ve seen some of these boards with integrated nVidia or ATi graphics, but seems to me (unless things have greatly improved) that said integration of graphics is asking for trouble, because I would think if that part fails, you’re stuck (again) with buying a whole new mobo, not just replacing a video card. I can live with integrated sound, but integrated video… that’s too big a step for me to take.

Among them, Intel and AMD also make processors and memory semiconductors. VIA makes some cheap processors but cannot compete effectively against either of them directly. ATi and NVidia make lots of dedicated graphics controllers that occupy most of their revenues and profits. Intel, VIA, and SiS also make motherboard chipsets that include integrated graphics.

Among them, only Intel is cash-rich enough to buy any one of the rest or all of the rest at once. So what are the combined market value, marketshare, revenues, profits, number of employees, etc. of AMD+ATi? HP plus Compaq didn’t go that well. VIA plus National Semiconductors or Cyrix or whatever it was didn’t go well either. I hope AMD and ATi can do some synergies.

I have been watching the chatter about AMD/ATI on some other boards for a while now, but Intel and nVidia would be a surprise. They really don’t play well with each other. ATI, on the other hand, has been in financial difficulties for a while… ever since I committed to nVidia now that I think of it.

ROFL! Chas!!! You are so funny!!! ATi has been in financial difficulties ever since you committed to nVidia…!!! ROFL!!!

AMD has stopped producing Chipsets some years ago (at least 4 years ago).
Through the merger with ATI, AMD will be able to produce their own as well as Intel Chipsets (well ATI has a License which is still valid till the end of the 4th quarter)…
Also it seems that the new companys name will be AMD. So in the near future we may see some Motherboards for Intel platform with AMD chipset…

Well actually ATI makes Chipsets for Intel and AMD…
They do not make any boards since ATI is a Fabless maker which means that they actually only do the design and let em produce by UMC or TSMC in Taiwan.
Motherboards with ATi Chipsets are available from Intel,MSI,Aopen,Elite,DFI etc…

Right, never heard of an ATi-made motherboard. Motherboards based on ATi chipsets often cost less than NVidia-based ones. ATi’s marketshare has been especially high in server motherboard chipsets, notebook motherboard chipsets, and dedicated graphics chipsets either for servers, notebooks, or desktops. Therefore, AMD will gain a much increased control over the motherboad makers, chipset makers, graphic card makers, notebook makers, etc. But paying over US$5,000,000,000 on ATi? Perhaps AMD wants to have over 50% market share both in integrated graphics and dedicated graphics while keeping constructive relationship with NVidia. AMD must have saved a lot of cash to be able to pay so much at once. A few years ago, AMD’s yearly revenues was just about US$2 billion and hardly any profits came out of it.

Well actually ATI makes Chipsets for Intel and AMD…
They do not make any boards since ATI is a Fabless maker which means that they actually only do the design and let em produce by UMC or TSMC in Taiwan.
Motherboards with ATi Chipsets are available from Intel,MSI,Aopen,Elite,DFI etc…

They do (did?) have their own factory in Canada… My old radeon had a Made in Canada-sticker. Not made in Taiwan/China…

They do (did?) have their own factory in Canada… My old radeon had a Made in Canada-sticker. Not made in Taiwan/China…

Will there still be AMD motherboards with Nvidia chipsets now that AMD have bought ATI?

Why write “made in canada” on a sticker on the PCB if it’s made in taiwan?

Today, the Company has more than 1,900 employees supporting customers from its headquarters in Markham, Ontario, as well as from offices in the United States, Germany, Ireland, France and the United Kingdom. ATI also has research and development facilities in California, Florida, Massachusetts, Ontario and Pennsylvania. ATIâ€™s manufacturing is done in Canada and Taiwan.

Probably closed down by now then…

Will there still be AMD motherboards with Nvidia chipsets now that AMD have bought ATI?

I imagine so, as nvidia-chipped motherboards for AMD-platform are the most popular around.

ATI some years ago closed their Fabs (they used to produce in Canada). The Chips are made in Taiwan by UMC and TSMC but that does not mean that the Boards are not made somewhere else. As far as I know official supplier of ATI cards under the ATI brand is Celestica (Celestica is Canada based) and Sapphire. As far as I know ATI and Sapphire signed an ODM, AiB, Manufacturing etc deal with Sapphire in 2001.

The new company will be named AMD so there should be no problem with Nvidia Based MBs for AMD and there most propably will also be Boards for the Intel platform with AMD chipset…AMD through the merger with ATI will now be able to create their own Chipsets as they have done in the Past when the first Athlons arrived. Intel also makes
its own GPUs and Chipsets etc and still have CHipsets from other makers like ATI etc…

Ok some addition about the speculation of Intel platform MBs with AMD chipset.

If intel don’t play nice, then they’ll find themselves “hung out to dry” from hardcore gamers -> No crossfire, no Intel motherboard, no intel cpu.

Similarly, nvidia currently has a massive market share in the AMD motherboard market. That’s alot to give up, due to a simple dispute about video cards. I doubt nvidia is particularly worried about it all, atm.