I realize that I’m the only fool who’s playing with this drive around here. But I’ve found something very new with the way the 12x strats are working that we haven’t seen on any other LiteOn AFAIK.

First a bit of background for those who are new to this. With previous drives, (and even the 1213S when using 4x-8x speeds) the respective write strategy is the same at each speed zone. What this means is that if you select 6x burn, the strat used for 6x is the same as the 6x zone when you burn at 8x.

With the 1213S, it appears that when you select 12x burn speed, all speed strats change. So when the drive starts at 6x, that zone is burned with a different strat than if you had selected 6x or 8x burn speed with the same strat.

This is very odd, and it means that any 12x strat must be individually customized in each speed zone. Or I am missing something.

Now for some visual evidence. First I’ll post 2 scans, each are of TY T01 media burned at 8x and 12x using the default TS08 strat with nothing but speed mod. 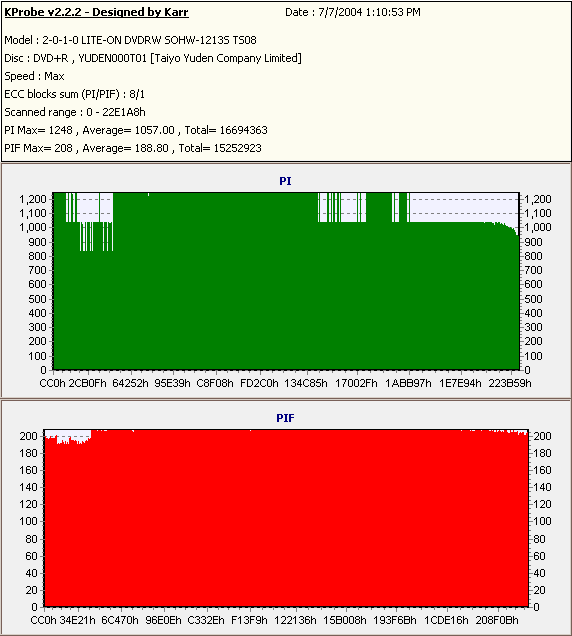 I wanted to confirm this first with the stock strat, because my first thought was that the omnipatcher was somehow missing something when it swapped strats.

Moving on now to 2 TY T01 discs burned with the Ricoh R03 strat, which is the best strat I’ve found for burning TY at 8x. (but not as good as the stock strat when burning at 12x 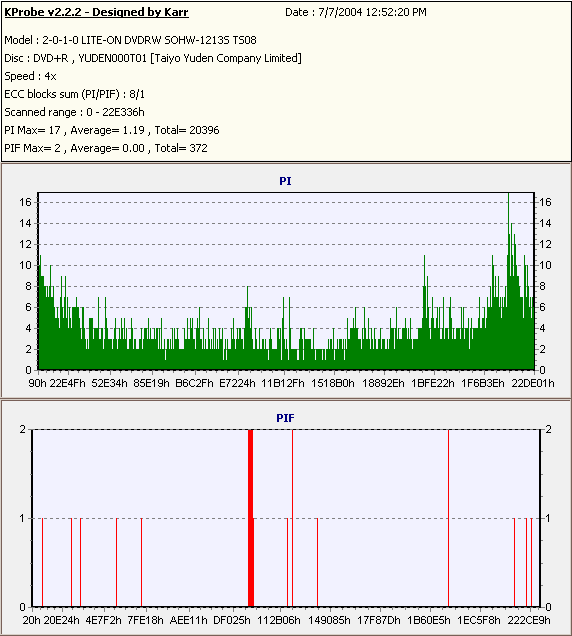 Here you see that at 8x selected burn speed, both the 6x and 8x zones are burned quite nicely. But when you select 12x burn speed (which is a “stock” speed for R03 media), the 6x zone is burned very differently but the 8x zone remains very good.

This “12x strat effect” appears to be different on different strats. In some cases, both the 6x and 8x zones are affected and in some cases only one or the other is. It occurs on all media supported at 12x in the stock FW, and also with all media using swapped strats, whether the strat supports 12x or not.

At least on the surface, it appears that we are screwed when it comes to strat swapping for 12x burning. :a This drive appears to making it’s own decisions about strats when you select 12x speed, and it’s also making bad decisions.

Any thoughts on this? Anyone?

Here is a 8x-burned Ritek R01 that I burned & scanned about 2 months ago (dig out the scan and brush off the cobwebs!). Notice how the errors are high in all 3 regions from 4x up to 8x?

In this disc batch, I had several discs that had across-the-board high PI errors. These discs couldn’t be played back. All of my other discs had PI averages between 1 and 10, without any significant spikes or high regions.

What was odd was that every one of these mega-error discs just happened to be one of the few discs that I burned at 6x or 8x. All of my discs burned at 4x did not have these errors.

Of course, my theory is that, well, it’s just Ritek being variable as always. But if it was purely variability, then why were none of my 4x burns affected? So my next thought was that the variability is amplified by what speed the disc is burned at. But the problem with that is that the 4x region and 6x regions have the same high errors as the 8x region.

I forgot to ad that there’s one other thing different at 12. The drive will spin up and down several times before writing the lead-in. Occasionally the burn will fail at this point (only at 12x).

I interpret this as meaning that the drive is doing some sort of surface scan of the disc before “deciding” which wrong strat to use.

Whatever it is, it doesn’t work too well.

so why dont you try to use a 8x strat instead of 12x strat and burn at 12x to see the result?( maybe the ricoh r02) or is that impossible?

so why dont you try to use a 8x strat instead of 12x strat and burn at 12x to see the result?( maybe the ricoh r02) or is that impossible?

Same thing happens, when you choose 12x, the other speed strats change.

try going lower to 4x strat or 2.4x strat, there must be something to improve this!
could it be that it is using a generic 12x strat when you insert a non 12x dvd, i know you can bump the speed in omnipatcher to 12x, but could have lite-on made the drive to recognize if it is 12x or not depending on the mediacode, even if you bumped it to 12x.

try going lower to 4x strat or 2.4x strat, there must be something to improve this!
could it be that it is using a generic 12x strat when you insert a non 12x dvd, i know you can bump the speed in omnipatcher to 12x, but could have lite-on made the drive to recognize if it is 12x or not depending on the mediacode, even if you bumped it to 12x.

Doesn’t seem to matter whether you’re using a “real” 12x disc or not, but I don’t have enough of them to waste to really check it out. Still that’s a thought…

As I understand the Omnipatcher, the drive does “think” it sees the 12x strat when you insert the non-12x disc

Ok, fess up. Where the hell in Albquerque did you get “real” 12x media

Ok, fess up. Where the hell in Albquerque did you get “real” 12x media

Decided to sacrifice a couple of my Ricoh R02 to test this. I’m out of MCC03 right now so I can’t verify it.
Here’s 2 R02’s, the first is burned at 12x, second is burned at 8x using the stock strats.

Bad writing quality from a LiteOn-drive, again. Can someone tell me why the people buy this crap?
IÂ´ll better buy LG, NEC or Pioneer, these brands cost only a few more bucks.But ItÂ´s, cheaper buy a Pioneer than burn lot of media with LiteOn and then throw it away

I got some more MCC003 and confirmed that even with “true” 12x media there is a clear change in 6x/8x strats when burning at 12x.

Burned at 8x with stock strat:[/b] 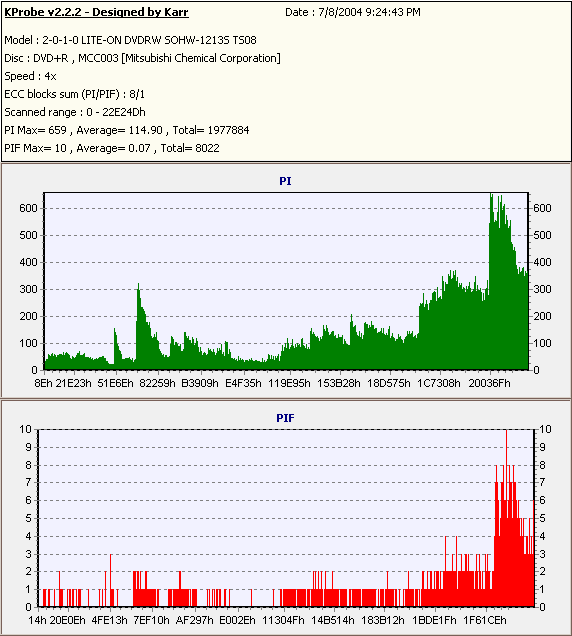 I played with most of the stock 12x strats on this media and they seem to exhibit the same behaviour at 6x, reall crappy. Yet it’s fairly easy to get the media to burn well at 6x when using 8x selected speed with many strats.